A Grade I Listed Building in Brampton with Stoven, Suffolk 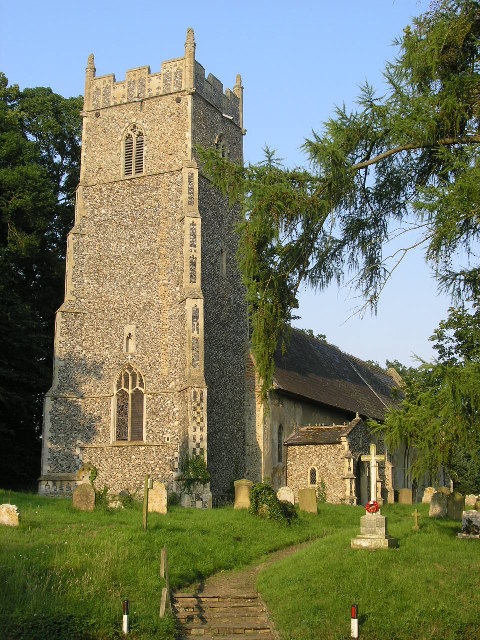 Parish church. Medieval, restored 1868. Nave, chancel, west tower,south porch,
north vestry. Flint rubble, the nave and chancel rendered, the east end of
the chancel rebuilt in brick; the tower is of knapped flint with stone
admixture; stone dressings. Slated roofs with crest tiles. Good C15 tower:
square, with 4-stage diagonal buttresses to the west face; crenellated parapet
with the remains of seated figures surmounting the corner pinnacles. Both the
parapet and buttresses have flushwork decoration. 2-light west window, above
which is a cusped ogee statue niche, now empty. 2-light bell-chamber
openings. Both nave and chancel probably have C13 cores, with considerable
later alterations. At the west end of the nave are 2 broad lancet windows,
one to the north and one to the south, with 2 further similar lancets at the
north east of the nave. The other nave windows are in Perpendicular style,
all with 3 lights, 2 to the south being square-headed. C15 porch, much
restored; good C15 nave door with 4 cusped panels and simple tracery. 2-bay
chancel: 2-light Y-tracery windows to the south, the easternmost window partly
original and shafted internally; between the windows is a Priest's doorway ana
also a wall tablet to Mary Repps (1727). 2 broad lancet windows to north. 3-
light east window renewed in C19 but with C13 shafting internally. Interior.
No chancel arch. C19 arched-braced nave roof; chancel roof ceiled over. In
the south sanctuary is a piscina with a Caernarvon arch and credence shelf,
and adjacent a drop-sill sedilia with 3 tiered seats. C19 furnishings,
including font and wooden rood screen. In the chancel are wall monuments to
Mary Leman (1807) (on the south wall); Robert Leman (1788) and Mary his wife;
N.T.O. Leman (1857), rector (both on the north wall). Several good C17-C18
ledger slabs to members of the Leman family Arms of George III dated 1797
over tower arch, with C19 framed copies of the Commandments to either side of
the arch below. Graded I for medieval work, notably the tower.