A Grade I Listed Building in Westhall, Suffolk 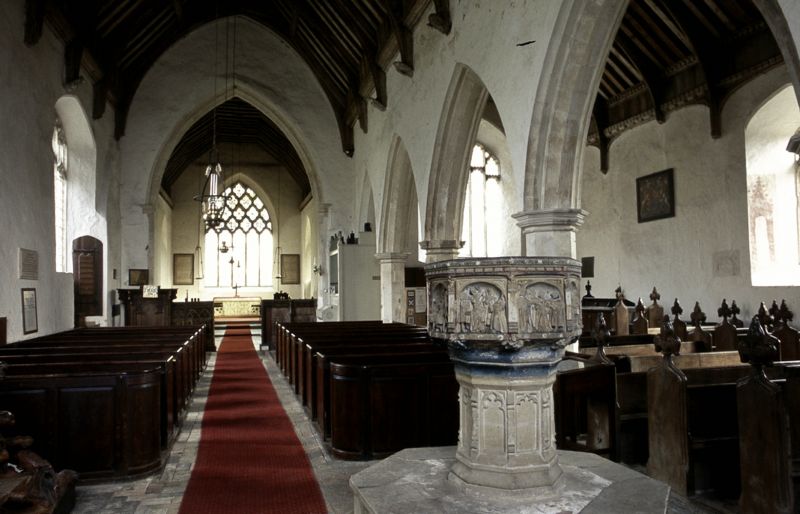 Parish church. C12 and C14. Rubble flint and freestone; thatched roof to
nave, plaintiles to aisle and chancel, which is slightly higher than the nave.
Nave, chancel, south aisle, north porch and south-west tower. 2-light
Perpendicular windows to south aisle and north side of nave; 5-light east
window with reticulated tracery, and a variant of reticulation, with a circle
with ogee octofoil above, to the north and south of chancel. Norman south
doorway to aisle: one order of colonettes, block or cushion capitals, a
scalloped decoration and an outer billet moulding around the jambs and arch.
C14 priest's door on south side of chancel with ogee arch. The C14 north
porch is faced with flushwork and has a 2-bay open timber roof. The north
doorway has a continuous moulding under a hood-mould on heads. Tower with
flushwork panelling on the lower stages of the diagonal buttresses and on the
battlemented top. This is said to have been raised in the C17. The building
has a complex development, with the south aisle having been the nave of the
original C12 Norman church, to which an apsidal chancel was once attached.
The west front of this church is now visible within the base of the tower,
which was added in the early C14. The C12 west portal, lavishly decorated,
has 4 orders of colonettes variously ornamented with billet, stylised flowers
and an outer incomplete ring of beasts. A small window above is set within an
arch and flanked by 2 blank arches, all decorated with zigzag ornament, the
window surrounded also by a chain of raised circular members. There are the
remains of wall-paintings in red ochre on the south wall of the aisle, and a
set of Royal Arms of George III. In the south-east corner, the damaged altar
tomb of Nicholas Bohun, (d.1602), with a genealogical brass above. The aisle
roof is in 9 bays; no collars, but the long arched braces tenoned into hanging
posts carrying carved bosses; an embattled and floral cornice with an upper
row of fleur-de-lys ornament. Mid C14 nave and chancel: nave arcade of 5 bays
with octagonal piers and arches with double hollow-chamfer. Nave roof in 9
bays, with arched braces to cambered embattled collars, and a moulded and
brattished cornice; painted headless figures remain to the base of some
corbels. Panelled early C19 benches. Seven Sacrament font retaining original
colouring in the panels; the 8th panel represents the Baptism of Christ. Bowl
supported by angels; high double octagonal base. Jacobean pulpit with the
door to the rood loft beside it. Carved and painted base to rood screen
remains: the panels are traceried and each has full-length paintings of 2
saints, 16 in all; base with enriched quatrefoils. Beside the north door, a
large wall-painting, apparently of a Madonna and Child under a canopy. In
chancel, a piscina with ogee head and cinquefoil cusping; plain sedilia; some
old poppyhead bench ends, and fragments of medieval glass in the north-east
window. Simple braced rafter roof. The floors are paved throughout with old
floor bricks.