The Parish Church of St Mary the Virgin 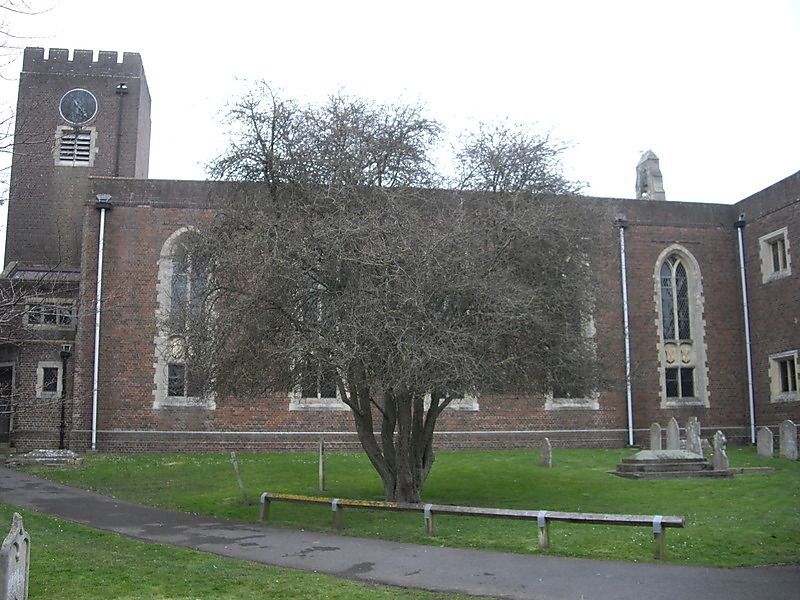 Entry Name: The Parish Church of St Mary the Virgin

PLAN: Body of five bays, aisled, a western tower flanked by two vestibules, north and south transepts and a chancel with apse. There are vestry rooms to the south of the chancel and a large C20 extension to the north, abutting the church at its north-east corner. The late C20 exterior is not of special interest.

EXTERIOR: A simple brick stringcourse runs along the parapet throughout and the window and door surrounds are of stone. The nave and transept windows are diamond leaded light with tall pointed arches and Y-tracery. There are broad transoms to the bottom of each window which are carved with shields. The transept windows to the east and west and the vestry and parish room windows are rectangular. The apse is five-sided with intersecting tracery windows.

The tower contains the main visible fragment of the 1826 church. Its west face has a large curvilinear tracery window within a moulded pointed arch. This sits above a small three-light mullioned window with stained glass. The tower has a battlemented top and little ornamentation aside from the clock faces to the north, west and south. The only other openings are the belfry windows which are mullions. The two vestibules to each side of the tower have canted corners with double doors set in segmental-headed moulded stone surrounds.

INTERIOR: The impression is that of a C18 church. The majority of the windows have clear glass providing an abundance of natural daylight, and the walls are whitewashed, with the stone nave arcade, chancel arch and apsidal arch left exposed.

Two identical vestibules with segmental headed doorways lead from the west end corners into the nave aisles and the base of the tower. Here, the original early C19 flagstone floor survives alongside some burial markers with legible inscriptions. There is a mid-C19 stone font of marble columns and carved cherubs and fleur-de-lis surmounted with a wooden font cover.

The nave is aisled and a pointed arched stone arcade divides the space and marks the five bays. The C18 feel in the interior is heightened by the 1930s wooden gallery which runs across three sides of the nave and into the transepts where it is supported by wooden Doric columns. Access is provided by stairs in both transepts and each vestibule at the west end. The staircases have a robust square newel post and distinctive splat balusters in a waved design. There are simple turned balusters in the gallery. The pews have been removed from the nave of the church, although they survive in the gallery. There is a large organ in the west gallery, which has a late C18 case and is from St Paul's Church in Bristol. The north and south galleries contain wall monuments dating to the late C18 and early C19.

The south transept has a stained glass two-light mullioned window of 1897. The wooden pulpit is situated in the nave and has steps and a sounding board. There is a rood, supported by a tie beam separating the chancel and crossing, and chancel screen from the 1950s. There are early C20 choir stalls in the crossing. The apse windows contain figures of Christ, a Madonna and the saints from C19 stained glass reset in clear glass.

HISTORY: There was a medieval church on this site until 1826 when a faculty was granted for the building of a new church. The architect was George Draper, a Chichester architect, and early photographs show a church with a three bay nave with a tower in a Georgian 'gothick' style with pointed arched windows and pinnacles. A chancel was added in 1889. In 1934, the church's appearance was transformed by W.H. Randoll Blacking, a Fellow of the RIBA, who remodelled the interior, re-clad the external walls, rebuilt the chancel and added transepts and vestibules to each side of the tower at the west end. In the post war period a large extension was added to the north.

The medieval font was retained in the new church, but has since been moved to St James's Church, Arundel Road.

SUMMARY OF IMPORTANCE: The Church of St Mary is an attractive building externally, a simple, geometric composition, well-executed in high quality 1930s brickwork with stone dressings and Y-tracery windows. The west end window of 1826 in the tower is a further point of interest as the most visible fragment of the earlier church. It is the interior, however, which is particularly special. Pevsner noted that 'the way [the galleries] are related to the complicated space gives one a lot of respect for the designer'. Respect is certainly due, for the interior has a surprising sense of spaciousness despite having galleries on three sides of the nave and in the transepts. The clear glass windows, some peppered with reset stained glass, enhance the airiness of the interior. There are also some fixtures of note, including font, pulpit and the pews and monuments in the galleries. The stone floor inset with burial markers in the base of the tower is a further reminder of the earlier stages in the building's history. The C20 extension is not of special interest.