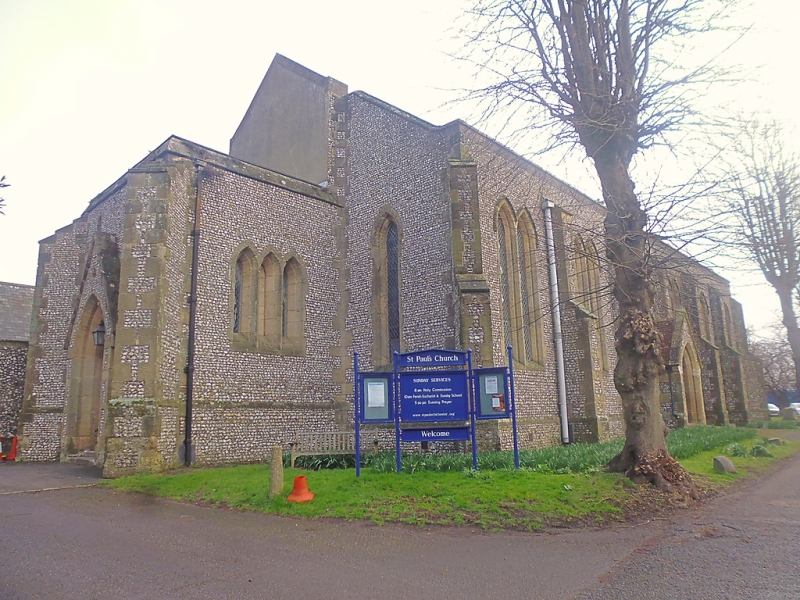 II
1836 by Joseph Butler. The SE buttress of the tower failed and part of the tower collapsed in 1883, and although it was repaired, by 1948 it had become unsafe again. It was demolished to its present level in 1951. A complex of parish rooms was added to the NW in 1993.

EXTERIOR:
Very tall in an unarchaeological early C13 style. The nave has pairs of very tall lancets along the N and S walls, with single lancets on either side of the chancel and on either side of the tower. There are tall, stepped buttresses between the pairs of windows. Small, gabled S porch with continuously chamfered outer opening and late C20 glazed inner doors. The chancel has a triplet of lancets in the E wall and single lancets in the N and S walls. The W tower, originally of three stages, has been truncated to a single stage with a flat roof lower than the nave roofline, leaving a large section of plain nave gable exposed above it. W door under a gabled projection and small lancets.

INTERIOR:
The nave is undivided internally, with a gallery at the W end. W gallery is supported on slim columns and has a panelled front of foiled arches. The tall tower arch is nearly hidden behind the organ and the gallery. Tall, pointed chancel arch with continuous chamfered outer orders and an inner order on shafts and EE-style capitals. Chancel recess shallow, but tall. Nave is ceiled and has very flat Tudor arched trusses with graduated, foiled arches as infill. Late C20 timber and glazed doors in NW corner of nave to parish rooms.

PRINCIPAL FIXTURES
C19 font with foiled arches on the bowl and stem. The furnishings are otherwise largely late C20.

HISTORY
Built as a chapel of ease to the parish church of St Peter, and intended to serve the growing suburbs of Chichester, St Paul's was designed by Joseph Butler of Chichester, fl 1834-55, a local architect who worked widely on churches in Chichester diocese in the 2nd quarter of the C19.

REASONS FOR DESIGNATION
The church of St Paul, Chichester, is designated at Grade II for the following principal reasons:
* An interesting and attractive survival of a pre-archaeological C13-style church by J Butler, a well-known local architect.