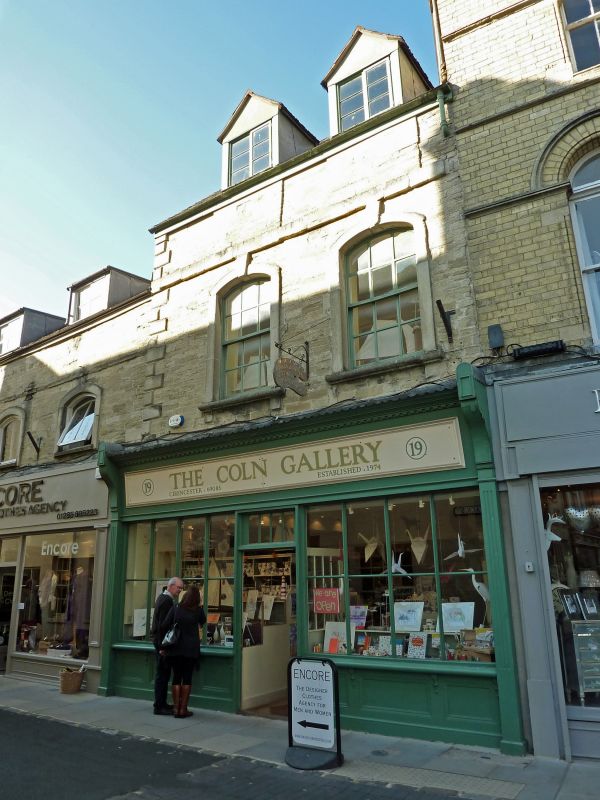 One of three shops at this address, that part occupied at the time of inspection by The Coln Gallery, dating from the early to mid-C18.

MATERIALS: The building is of well squared and coursed limestone with a slate roof and brick stack.

PLAN: The footprint of the building is slightly irregular, with the long plot narrowing towards the rear.

EXTERIOR: The building is of two storeys and attic, two bays wide. The ground floor has an early-to-mid-C20 shop front in a C19 style. The first floor has two early to mid-C18 sash windows, each six-over-six panes, set in segmental-headed reveals with moulded stone cills and keyed lintels. A band course rests on the keystones, above which the stone panel continues upwards to the eaves. There are rusticated quoins to the left of the first floor. There are two gabled dormers to the attic, with C20 timber casements.

HISTORY: The three buildings comprising the current 19 West Market Place date from three distinct periods: that to the left (west) is of the late C18 or early C19; that to the centre dates from the early to mid-C18; and the easternmost building appears to date from the later C19, at least in its façade. Ordnance Survey mapping shows that the current three units were two in 1876, one being occupied by the later C19 building, the other comprising the two remaining units. By 1902, all three are shown as a single property, which is likely to indicate that they were in the same ownership and usage at this time. This is also the case in the 1921 and 1932 editions of the maps. It is likely that the Post Office identification of all three buildings as Number 19 dates from this period, and explains why three clearly separate and distinct buildings share the same postal address. All three units have had their ground or ground and first floors occupied by commercial premises since at least the middle of the C20, but probably from rather earlier than this. They all remained in retail use at the time of inspection (2008).

REASONS FOR DESIGNATION DECISION:
The portion of 19 West Market Place occupied by The Coln Gallery is designated at Grade II, for the following principal reasons:
* This shop is set apart from the others in the run by its architectural interest, with elegant upper floors which retain their original fenestration and demonstrate good quality in their architectural detail
* The ground floor shop front, though it dates from the C20, is sympathetic in character to the rest of the building
* The plan form appears largely unaltered, and the shop retains its showroom space on the first floor
* Group value with the many other listed buildings in the remainder of West Market Place and Blackjack Street
* The other two buildings comprising the remainder of 19 West Market Place, which flank this building, are not of special interest and are excluded from this list entry