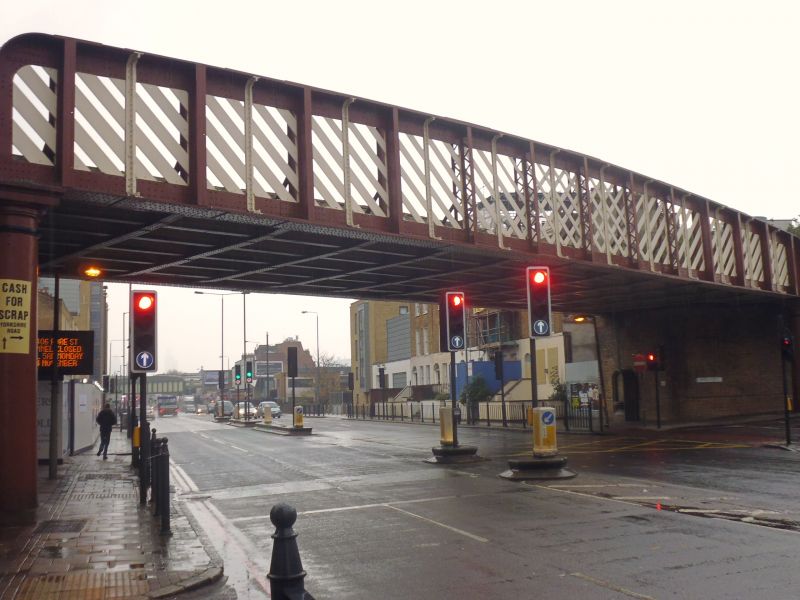 Former railway bridge, now dis-used. 1870s for London and Blackwall Railway Company and its lessee, Great Eastern Railway. Wrought-iron superstructure supported by brick abutments and three cast iron columns.
Superstructure of latticed box girder with flat bolted underside and diagonal tensile members of wrought-iron flat plates. Yellow brick abutments in English bond at each end carry the superstructure, along with pair of additional cast iron column supports to east side. Drinking Fountain (q.v.) attached to northern abutment. The superstructure, abutments, and columns are all structural components of the bridge. The c.1880 viaduct continues to north and south.
HISTORY: The London and Blackwall Railway Company and it lessee, the Great Eastern Railway Company, completed the viaduct that carry the Limehouse Curve in 1880. This link provided a link, allowing goods trains from Millwall and the other London Docks to run directly onto the main-line system of the Great Eastern Railway. The listed bridge is much wider than the present roadway, reflecting the greater width of the Commerical Road it was built to cross. Commercial Road was constructed c.1802-04 as the toll road connecting the East and West India Docks and the City.

Group value with the Grade II London and Blackwall Railway viaduct of 1839-40 (q.v.), the adjacent houses along Commercial Road (q.v.), the Accumulative Tower (q.v.) and the dated 1886 Drinking Fountain attached to the northern abutment (q.v.)