Church of the Most Holy Trinity with St Mary 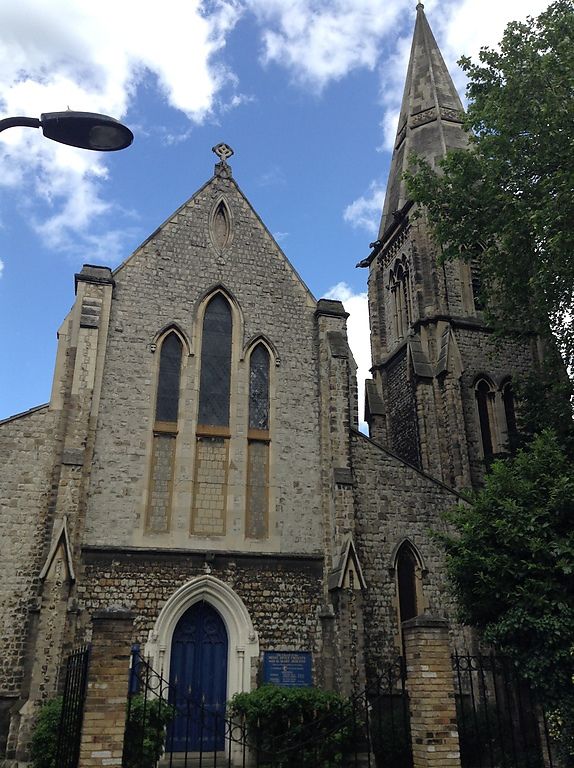 Entry Name: Church of the Most Holy Trinity with St Mary

EXTERIOR: Built in the Early English style of the 13th century and with an archaeological accuracy almost unknown ten years previously. The E end fronts directly on to Bletchley Street and has three graded lancets for an E window (now blocked). The chancel is short and has a single lancet on either side. The nave and lean-to aisles are of four bays and have pairs of lancets in each bay: the bays are demarcated by buttresses with offsets. The W end, which forms the principal elevation blocking off the view along a short street, Alford Place, has a tall nave with three graded lancets for a W window, the sloping ends of the aisles, each with a single lancet window, and the SW steeple. The tower has two stages with a pair of tall lancets in the lower part, and a belfry stage with a small, narrow single lancet to each face flanked by narrow blind arch. The spire is of the broach type and has ribs at the angles and an ornamented band half-way up. The W entrance in the nave has a moulded, arched head and a shaft in each of the reveals. All the windows and arches on the exterior have hood-moulds.

INTERIOR: The walls are plastered and whitened. The body of the church is of four bays with arcades between the nave and aisles. They have moulded arches, octagonal piers and moulded capitals: the bases have sharply pointed broaches to smooth the transition from square bases to octagonal piers. Between the nave and short chancel is a very richly moulded arch with a band of dog-tooth ornament in the head: the responds have multiple shafts. The presence of the road immediately beyond the E wall meant that no extension of the chancel was possible, as often occurred in the later Victorian period and expansion of the chancel area took place into the E bay of the nave, the floor of which was raised: there are low white glazed brick walls to the sides of this area. The nave is tall and has a roof with arch-braces to a collar with a thin crown-post: the wall-posts rise from stone corbels. Over the projecting one-bay chancel area the roof is vaulted and has been painted blue in the late C20 with a peppering of stars. The aisle roofs are simple lean-tos. Across the E wall are five graded lancet arches, the middle three being blocked windows.

PRINCIPAL FIXTURES: The most important item is the polygonal pulpit made in 1686 for the church of St Mary Somerset, Upper Thames Street (demolished, apart from tower, in the 1870's). It then went to the now-demolished, nearby church of St Mary, Britannia Walk, Hoxton. It has panelled sides and seems to have been of the wine-glass type but the stem of the base is now lost. Part of a font cover from the same source is reused as a corbel for a statue. The church has an extensive collection of Anglo-Catholic fittings from the 1930s onwards. The reredos with a relief of the Crucifixion is by W E A Lockett. The confessional with tall Corinthian pilasters, possibly made up from old woodwork, is by Martin Travers who also did the painting above the reredos (1942) and the roundel above the chancel arch (re: Cherry and Pevsner). At the W end there is a mid-20th-century organ gallery: the organ came from Holy Trinity, Folkestone (re: Clarke). The high altar was made up in 1941 of stones from six churches destroyed by air raids in 1940-1. The Victorian wooden altar in the N aisle has attractive floral paintings set in mandorlas. The tiled dado at the E end commemorates a death in 1874. The mid-19th century pews are movable and have L-shaped ends and open backs. The mid-19th century font has an octagonal bowl with mouldings and a nail-head band, set on a stout octagonal base. The only stained glass is a window of 1891 in the baptistry, the rest having been destroyed in the Second World War.

HISTORY: The church was built to meet the needs of the expanding population of this area of London in early Victorian times. The chancel is very short and suggests that in its early years the church did not have the strong high churchmanship that characterised it in the 20th century and which is still the pattern of worship today.

The architect, William Railton (c1801-77), was a pupil of the London architect William Inwood and attended the Royal Academy Schools in 1823. He was architect to the Ecclesiastical Commissioners from 1838 until 1848 and was the designer of churches and many other buildings over a wide geographical range. His most famous work is Nelson's Column of 1839-43 in Trafalgar Square.

REASONS FOR DESIGNATION:
The church of the Most Holy Trinity and St Mary is designated at Grade II for the following principal reasons:
* It is a good example of an early Victorian church built in the Early English style, designed by the architect of Nelson's column.
* Its fixtures and fittings are of special interest ranging from a late 17th-century pulpit, through Victorian work to Anglo-Catholic furnishings of the mid-20th century.