A Grade I Listed Building in Lutton, Lincolnshire 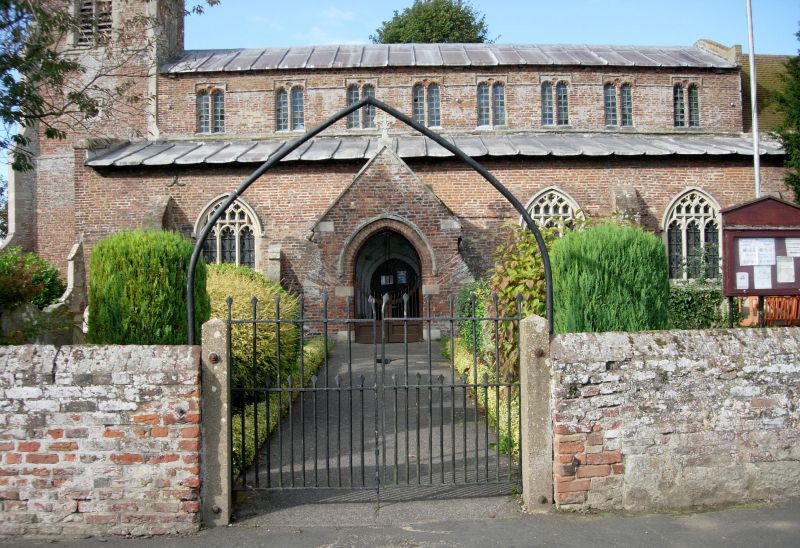 Parish church. Early C16, restored 1859.
MATERIALS: Red brick with ashlar dressings. Lead roofs to all but the chancel, vestry and porch which have plain tiles. Ashlar coped gables with single ridge crosses to the east chancel and the porch and single C20 stack to the north chancel.
PLAN: Tower, nave, aisles, south porch, chancel and north vestry.
EXTERIOR: Diagonal buttressed tower, the south west buttress with C18 memorial, stair turret to the north east corner. Embattled with single corner squat finials and 2 gargoyles to each side apart from the west. Topped with ashlar spire with single tier of 2 light gabled lucarnes. Of 3 stages with bands and set on a moulded and chamfered plinth. West front with single pointed segmental arched window with 2 arched and cusped lights above and below a single transom, cusped panel tracery, hood mould, grotesque head label stops, flush ashlar quoin surround and continuous sill band. Above to the west, north and south sides are single irregular trefoils with panelled spandrels and Tudor hood moulds. Bell chamber with 4 pointed arched 2 light windows with cusped reticulated tracery, hood mould and label stops, over to the South is a single clock face. North west aisle is set on a chamfered ashlar and brick plinth and has a single arched 2 light C19 window with cusped panel tracery. The north wall is buttressed and has a single arched 2 light window with cusped panel tracery and flush ashlar quoin surround. To the left is a chamfered arched doorway with hood mould and plank door and to the far left 2 similar windows with similar plinth under that farthest left extending to the east wall which has a single similar larger 2 light window with flush ashlar quoin surround. The clerestory has 8 two light brick windows with arched and cusped lights and plate tracery under a flat arch. Continuous Tudor hood mould. North chancel is set on a deep brick and chamfered ashlar plinth and has a single C19 arched 2 light window with cusped flowing tracery and flush ashlar quoin surround. To the left is the C19 lean-to vestry with further lean-to projecting from the right, both lean-tos with single doorways with plank doors. East vestry with single C19 arched 2 light window with cusped reticulated tracery and flush ashlar quoin surround. East chancel with single arched C19 3 light window with cusped tracery, hood mould, label stops and flush ashlar quoin surround. Over is a single small circular opening. The south chancel has a single C19 arched 2 light window with cusped flowing tracery, hood mould and label stops. To the right is a single ashlar memorial decorated with angel's head. To the left is a chamfered pointed arched doorway and on the far left and set high a single ashlar memorial of 1770 decorated with angels' heads and drapery and set under an open pediment. The east wall of the south aisle has a single restored arched window with 3 arched and cusped lights,cusped panel tracery and hood mould. To the left is a decorative C18 ashlar memorial. The buttressed south wall has 2 C19 arched 3 light windows with cusped panel tracery, hood mould and label stops. To the left is the gabled and buttressed porch with chamfered brick arch and ashlar hood mould and human head label stops. Inner moulded arched doorway with hood mould. To the left is a single similar C19 window. The west end of the south wall and west wall are set on a chamfered brick and ashlar plinth. West wall with single C19 arched 2 light window with cusped tracery. The clerestory corresponds to the north.
INTERIOR: 4 bay nave arcades of ashlar with moulded arches, quatrefoil piers and moulded capitals. Ashlar tower arch with chamfered jambs and moulded arch. Ashlar chancel arch with circular responds, moulded capitals and double chamfered arch. The east wall of the north aisle with steps and archway to former rood loft. North chancel with C19 decorative piscina and chamfered pointed arched vestry doorway. Tower with pointed arched aumbry and pointed segmental arched doorway with C17 plank door to stair turret. C19 reredos. C18 turned altar rails. 1702 hexagonal pulpit with stair case, the shaped and carved panels further decorated with marquetry, given by Dr. Busby of Westminster School. C17 alms chest. C18 hexagonal table top decorated with marquetry. C16 octagonal font, the bowl with lower frieze of fleurons, the base with decorative motifs. West nave with evidence of former roof line. The present C16 roof with moulded beams and carved bosses is supported on octagonal pilasters which run between the clerestory windows. Clerestory with continuous sill band. Aisle roofs with C16 moulded beams. South chancel wall with memorial to Austine Daniell with flanking damaged fluted pilasters and topped with broken pediment containing cartouche.
HISTORY:By the C8 Lutton had become an established Anglo-Saxon settlement by the sea. During the C13 reclamation from the receding sea provided fertile land for grazing and agriculture. Early industry in Lutton also included fishing, as recorded in the Domesday Book of 1068. For many centuries the village was part of the estates of the Duchy of Lancaster. Until the Dissolution of the Monasteries the Church of St Nicholas was in the possession of the ecclesiastical estates of the Cluniacs of Castle Acre Priory, Norfolk. There is evidence that a 'parochial chapel' was built somewhere in the village during the C12 and it would appear that land gifted around one hundred years later provided the site on which the present church stands. The church is of early C16 date, and underwent restoration in 1859.
SOURCES: D Secker, 'A Brief Account of the Parish Church of St. Nicholas Lutton' (2007)

REASONS FOR DESIGNATION DECISION
Church of St Nicholas is listed at Grade I for the following principal reasons:

* It is a well-preserved C16 parish church built of brick.

* There are believed to be less than 150 examples of pre-Reformation church brickwork in England, many of which are individual components such as an added or rebuilt aisle or chancel, rather than the complete building. St Nicholas' Church is built almost wholly of brick and unusually incorporates clerestorey windows of cut brick, rather than the more usual stone dressings to window openings.

* It is listed at Grade I in recognition of its early date, degree of completeness and the quality of the surviving historic fabric.