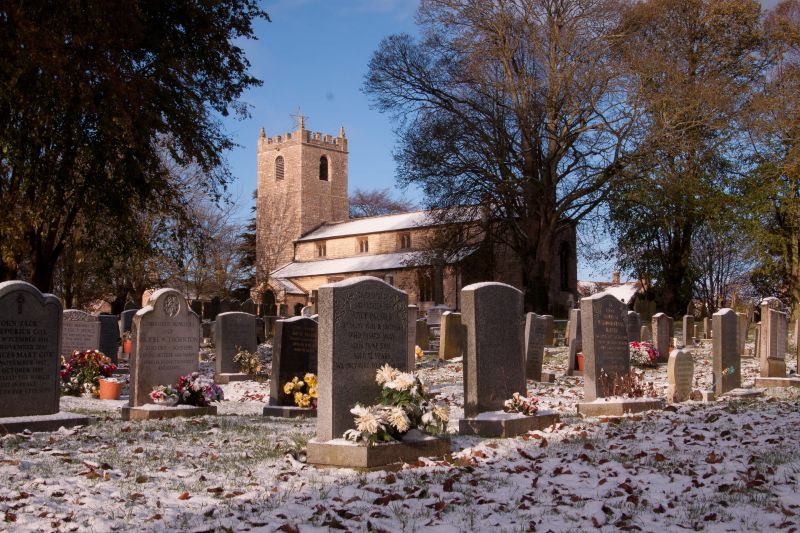 Parish church. C13, 1768 by Thomas Bell, 1823 by E. J. Wilson,
1912 by Temple Moore, and C20 minor alterations. Squared
limestone rubble with slate roofs. Western tower, nave, chancel,
2 aisles, south porch, north vestry. The 3 stage western tower
of 1768 has off set belfry stage, embattled parapet with angle
pinnacles. Gothick west door with crocketed ogee head supported
on half round side shafts. Above is a 2 light C19 window and
above again an ogee headed plaque recording the building in 1768
by Thomas Bell, builder and a clock with black face set in a
lozenge shaped surround. To belfry stage louvred semi-circular
headed lights to all faces. West end of north aisle has a 2
light C19 window, and beyond is the gabled north vestry by Temple
Moore containing a heavy 3 light window with large mouchettes and
quatrefoils. To left a plaque recording the vestry construction
in 1912 in memory of Bishop King. Beyond again a C20 addition.
To east side a 2 light window with a C20 fixed light and to left
a planked door. The north aisle has 3 sets of reset C14 3 light
windows with cusped heads and hood moulds. The north clerestorey
has 4 paired lights with hollow chamfered reveals and cusped
heads. The east wall of north aisle has a smaller 2 light C14
window matching the rest. The chancel terminates in a facetted
apse with 2 light ogee headed cusped windows. The south side
matches the north side. The gabled south porch has outer moulded
2 centred arch with hood, side benches and inner pointed doorway.
Interior: the late C13 north and south arcades of 3 bays each
with octagonal piers and capitals, double chamfered arches with
hoods, ammonite and head labels to south and human head to
north. At the east of south aisle a C19 moulded doorway to
present vestry, and in the north aisle the entrance to the former
vestry. In the chancel a further double chamfered arch on the
north, the eastern respond of which has a half round capital with
foliage. Traces of red paint above the respond. The chancel has
an elaborately painted C19 king post roof with texts. The
reredos, screen and rood are C19, and in chancel are 2 reused C17
bench-ends. The late C18 octagonal font stands on a tall pillar
and has trefoil decoration to the panels. In the north aisle
glass d.1917 by Burlison and Grylls to the founder of the
Bluecoat School, Lincoln, and another of 1919 to the RAF at
Scampton. Hatchment on west wall of nave and a holy water-stoup
beside the lectern.