A Grade I Listed Building in Claxby, Lincolnshire 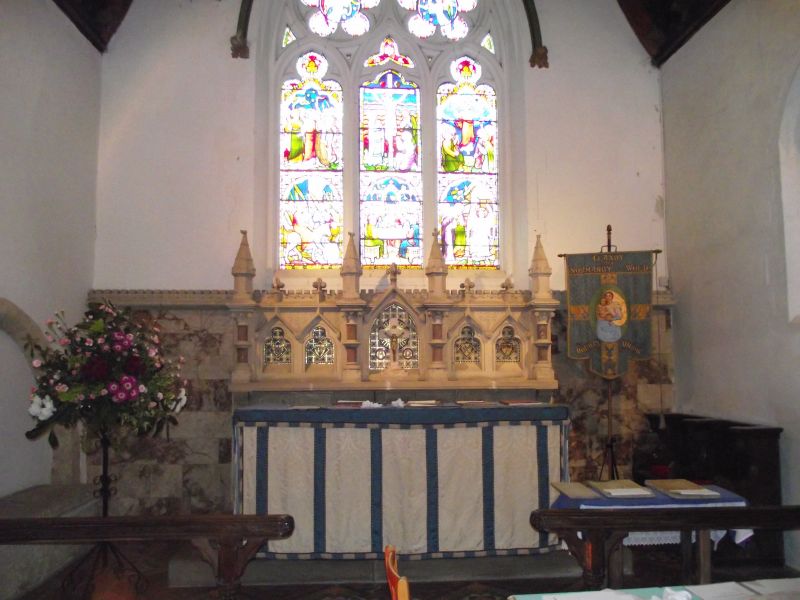 Parish Church; C13, C15, C16, 1871 restoration by James Fowler
of Louth; squared coursed ironstone rubble, ashlar dressings,
slate roofs with stone coped gables and cross fleury to ridges.
Western tower, nave with clerestorey, north and south aisles,
south porch, chancel, vestry. The 3 stage tower has a plain
chamfered plinth, 2 chamfer moulded string courses and roll
moulded cornice to battlemented parapet, which although much
restored dates from C15 and has 8 pinnacles and 4 gargoyles.
Corner buttresses to 1st stage only. The south side 2nd stage
has a C19 pointed 2 light window. The bell openings to each
face are C15 2 light openings heavily recut, with hood moulds.
The west side has a C19 3 light window with trefoil heads, and a
plain light and similar 2 light window to south side in 2nd stage.
The north face is as the south plus an angled stair turret. The
north aisle has a plain chamfered plinth, a C19 lancet west
window, a blocked C13 north door with chamfered arch and plain
hood mould, a 3 light C16 window with shallow 4 centre head.
The vestry is C19 with a single door and light. The chancel
east window is of C19 geometric design. The south side has 2
recut late C13 trefoil headed windows with hood moulds and C19
label stops. The south aisle has C19 lancet west and east
windows, a C19 2 light south window and a C19 south porch. The
clerestorey to both north and south faces has 2 two light recut
C16 windows. The south doorway is C15 with concave moulding.
The door has interesting C19 ironwork decoration. Interior:
The 2 bay C13 north arcade has octagonal column and responds with
double chamfered arches. The 2 bay south arcade dates from 1871
and is in the Early English style. The C13 tower arch has
triple chamfers and the C13 chancel arch is double chamfered.
The chancel imposts are both carved heads, that on the north is
of a man pulling his mouth open and on the south he sticks his
tongue out whilst both hands hold up the arch. The fittings,
stone pulpit, oak screen and font are all from the C19
restoration. The chancel is floored with Minton tiles and has a
fine C19 stone reredos with gilt mosaic decoration. The east
wall of the nave has C19 painted designs and texts and the
stained glass also dates from the restoration. The large C19 oil
painting is one of a group of seven in this area (cf South Kelsey
of Normanton). In the north aisle are 2 C19 painted iron candle
brackets. Monuments: In the chancel under a recess on the
north side is a C13 tomb slab with a quatrefoil headed cross and
a shield, said to be the tomb of the founder Brayboeuf. On the
south side is a tomb erected in 1605 to John Witherwick d.1595.
It consists of a tall base chest, decoratd with a pattern of
circles and rectangles. Above the chest is an inscription panel
and on this are 2 kneeling figures of a man and a woman facing
each other across a prayer desk. Behind the woman is a further
female figure, now headless. This group is flanked by single
Doric columns supporting an entablature which has recesses filled
with coloured glass. The frieze is also decorated with coloured
glass circles. Above is a shield with flanking scrolls. Beyond
are 3 brasses, to Fitzwilliams Armiger d.1634, with a shield
and helmet over the inscription; to Jane Burnaby d.1653, and to
Mary Monson d.l638 with a scrolly shield over the inscription.
Marble tablet to the Rev. Richard Dixon, d.1819.