Church of St. Nicholas/Or All Hallows 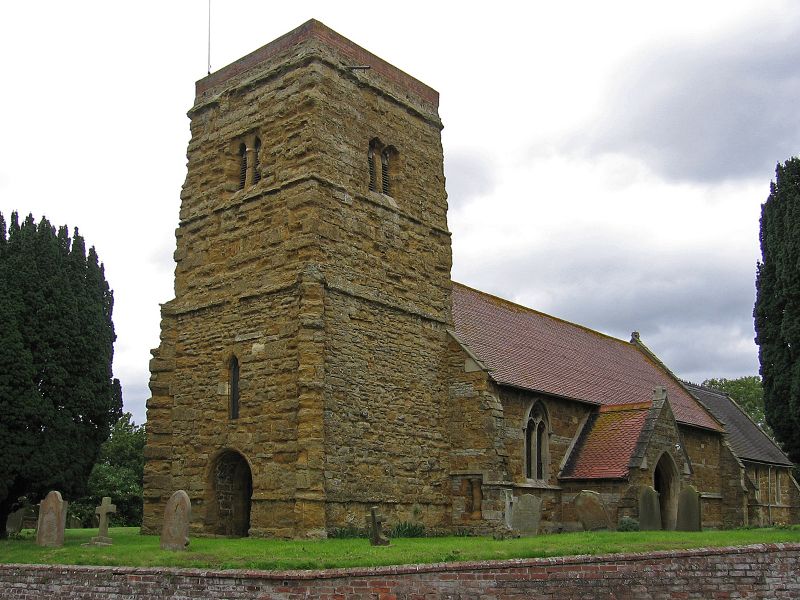 Parish Church; C13, C18, all church except tower rebuilt in
c.1860; Ironstone rubble with ashlar dressings, red brickwork,
fish scale and plain red tiled roof and plain brown tiled roof.
West tower, nave, south porch, chancel, north aisle and vestry.
The 3 stage tower has a tall plinth with chamfered top, 2
chamfered string courses and parapet moulding with top of parapet
in C19 brickwork. There are splayed angle buttresses to the 1st
stage only. The bell openings to each face are C13 plain paired
lancets. The west doorway is C18 with a semi-circular head with
plain imposts; the 6 panelled door is deeply inset. Above the
door is a single C13 lancet. The C19 north aisle, has a
separate gabled roof from the nave with stone coped gables and
red plain tiled roof. The fenestration in Early English style
consists of single east and west lights and 2 three light north
windows. The chancel with brown tiled roof has a roll moulded
string course, a single north light, a 3 light east window and 2
lancets and priests door on south side. The south side of the
nave has a red fish scale tiled roof. In the nave wall at high
level is a lightly inscribed slab to Richard Todd d.1733. Also
built into the wall are the end of a C13 grave slab with
floriated cross and 2 pieces of chevron moulding. The windows
are a single 3 light and a single 2 light to either side of the
porch. Below the 2 light window is a C12 slab built into the
wall with lines of incised chevron ornament; possibly part of a
grave slab. The south porch and doorway are C19, but built in
over the doorway is a C13 small floriated cross in relief
carving. Interior: The C13 tower arch is pointed and triple
chamfered. The rest of the interior dates from C19, the 4 bay
north arcade having pink marble piers. The cast iron screen and
pulpit are C19. In the north aisle is a table tomb under an
arched recess in Gothic style, to William Chambers d. 1855 and
his wife d. 1858. In the chancel is an inset memorial to the
Wright family dated 1894. A fine C13 coffin lid carved with a
tree with serpent roots can be found on the south side of the
nave. It is possible that the church was partly rebuilt with
stone from the demolished Church of St. Nicholas at South Kelsey
and hence the confusion over the dedication.