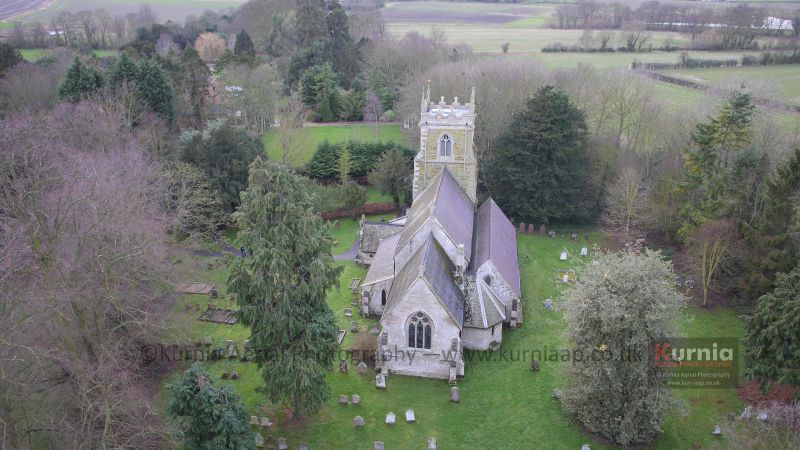 TF 48 NW GREAT CARLTON CHURCH LANE
1/6 Church of St.John
the Baptist
9.3.67
G.V. II
Parish church. C15 tower, church rebuilt in 1861 by James Fowler
of Louth in C13 style. Coursed limestone rubble and squared
greenstone rubble. Slate and tiled roofs with decorative iron
ridges. Western tower, nave with clerestory, south porch,
chancel, aisles and vestry. The 3 stage greenstone buttressed
tower has embattled and pinnacled top with gargoyles. To the
belfry stage are cusped paired lights with panel tracery, hood
moulds and label stops, to each face. On the south side are 2
black letter inscriptions and a pair of trefoil headed lights to
middle stage. The west doorway is continuously moulded with
hood. Above is a 2 light window with panel tracery and concave
surround. The north aisle is separately roofed and has a 3
light window to west and 4 paired windows to north. Charming
facetted vestry with pointed lights. The chancel has a fishscale
tiled roof. The east window is of 3 lights with Geometric
tracery. The chancel south wall has a pair of 2 light windows.
The south aisle has 4 lancets in the south and a single one to
the east and west. The clerestory has 4 cusped triangular
lights. The gabled south porch has a moulded outer arch with
angle shafts and trefoil side lights. The single chamfered
inner doorway has moulded hood and stops. Interior. The 4 bay
arcades have octagonal piers, capitals and double chamfered
arches incorporating much reused material. The double chamfered
tower arch incorporates C15 moulded imposts and voussoirs. The
C19 double chamfered chancel arch has keeled responds. The
banded brick and ashlar interior has encaustic tiled texts and
panels. The chancel roof is supported on moulded corbels, and
there is a moulded doorway to the vestry. Handsome marble and
mosaic reredos of 1890 with good stained glass window above of
1892. All fittings including decorative cast iron chandelier
and panelled and stencilled organ are C19. The C15 octagonal
font has blank traceried panels, octagonal stem and base, and
comes from Little Carlton church. There is also a C19 font,
belonging to this church. In the chancel north wall are 2 wall
monuments to Frederic Pretyman, d.1905, and his wife Georgina,
both in the Gothic Taste.