A Grade I Listed Building in Carlby, Lincolnshire 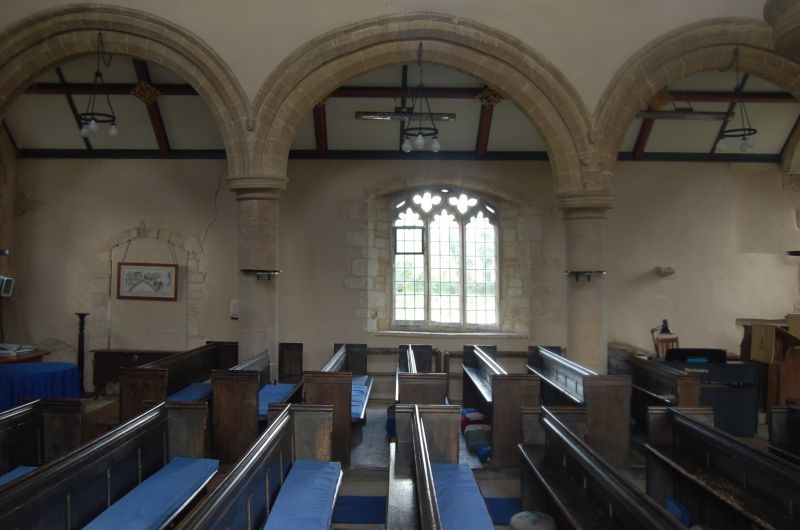 Parish church. c.1200, early C13, late C13, C14, C15, 1821,
Coursed limestone rubble. Ashlar. Collyweston slate, slate and
lead roofs. Stone coped gables. Western tower, clerestoried
nave, aisles, chancel, south porch. 3 stage C13 tower in coursed
limestone rubble has clasping corner buttresses to ground stage
only, 2 chamfered string courses, broach spire on human head
corbel table with 2 sets of lucarnes in the 4 principal
directions. The lower ones are of 2 lights, with trefoil heads
to the lights and quatrefoils over. The upper ones are of 2
pointed lights. The tower belfry stage has 2 light bell openings
with octagonal central shaft moulded capital, pointed heads to
the lights, and hood.mould. The west window is a lancet with
hood mould and above is a smaller similar window. The north
aisle has 2 pointed lights to the west end, with slate roof. In
the north wall a blocked reset C12 arch with moulded hood and
imposts, and a C14 3 light cusped ogee headed window with
cambered arch. The nave roof is of lead and there is a
clerestory of 3 paired C14 cusped lights. In the east wall of
the aisle a late C13 2 light plate traceried window with
quatrefoil. In the north wall of the chancel is a window of 3
lights, C15 with heavy panel tracery. In the east wall of the
chancel is a similar window and above a plaque recording the
restoration of the chancel in 1821. The south wall has a central
pointed doorway with hobnail imposts and moulded hood and 2 late
C14 2 light windows with cusped heads to the lights and low 4
centred heads. In the east wall of the ashlar south aisle a 3
light C15 window with panel tracery. The south wall has 2 three
light C14 windows with cusped ogee heads and cambered heads. In
the west wall a single C14 light with cusped head and moulded
hood. The gabled C14 ashlar porch has double chamfered outer
arch and moulded imposts and above a trefoil niche. Side
benches. The fine inner doorway has deeply recessed continuously
moulded surround with 4 centred arched head and embattled stops
to the moulded hood. The original planked door has contemporary
strap hinges and a pierced iron plate for closing ring, now
removed. Interior. 3 bay nave arcades, c.1200, with double
chamfered rounded arches, chamfered hoods, with beast and human
head stops. Circular piers and abaci, some with nail head
decoration, tapering responds to the east. Early C13 pointed and
double chamfered tower arch also with tapering responds. Above
an off centre pointed single chamfered doorway and the earlier
nave roof pitch can be seen. C14 tie beam roof with arched
braces to wall posts, and King posts. In the south aisle a C14
cusped ogee piscina and by the door a similar hacked back stoup.
Steeply pointed double chamfered early C13 chancel arch with half
rounded shafts to reveals and octagonal imposts. Above the
chancel arch a painted C15 doom depicting the dead rising from
their graves, tended by angels and demons. In the chancel a late
C13 pointed headed piscina with moulded hood and stops.
Fittings. Late C17 turned baluster altar rails and panelled
pulpit. C18 panel backed choir stalls, 2 C14 oak pews with plain _
ends and back rests, otherwise all fittings are C19. C13 tub
font with moulded octagonal top and shaft. The top has a form of
billet moulding. Monuments. In the north aisle north wall a C14
moulded and pointed tomb recess, now containing a coped slab with
stepped base cross fleury and large foliate leaves. On the
chancel north wall a marble wall plaque in the form of an obelisk
by Bingham of Peterborough to Elizabeth Clarke d.1792.