A Grade I Listed Building in Tallington, Lincolnshire 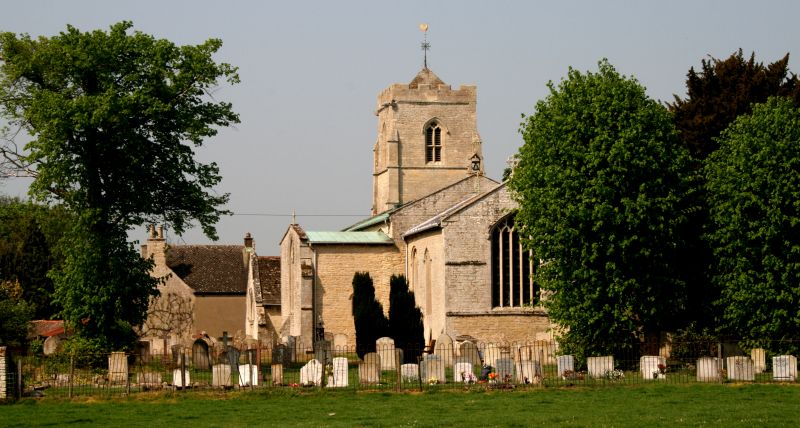 Parish church. Mid C12, early C13, late C13, C14, C15, spire
destroyed 1762, restored 1879. Coursed and squared limestone
rubble, ashlar quoins and dressings. Copper, lead and
Collyweston slate roofs. Western tower, clerestoried nave, south
and north transept, aisles, south porch, chancel. 3 stage C14
tower with clasping angle buttresses, chamfered bell moulded
plinth, string courses and battlemented parapets with angle
grotesques. The tower is slightly offset to the north. The
belfry stage has paired C14 ogee headed lights with trefoil heads
and quatrefoil over. In the west wall is a 2 light similar
window with hood mould and lion terminals. In the north tower
wall is a trefoil headed louvred light. Nave and aisle roofs are
roofed in copper. In the west wall of the north aisle is a 2
light C14 window with ogee heads and flat arch. In the north
wall is a similar 3 light window and a blocked pointed doorway.
The clerestorey is C14 with 2 pairs of small cusped lights. At
the east gable of the nave is a C15 single gabled sanctus
bellcote. The north transpet has a 3 light C15 window with panel
tracery and hood mould. The north wall of the chancel has a
blank projection. The east window is C15 of 5 slender lights,
with panel tracery, 4 centred arched surround with lion head
stops. In the south wall is a segmental headed doorway, a
trefoiled low side window and 2 three light windows, one with
early C14 cusped lancets, the other with C15 cusped heads. The
south transept has a C13 lancet, possibly reset, in the east, and
a C14 3 light window with daggers to the head. In the walling
are lengths of free stone banding. The clerestory matches that
to the north and in the south aisle is a C15 3 light window with
cusped heads. On a south aisle south west quoin is an
inscription "James Briggs Guardian 1677". The gabled C14 south
porch with Collyweston slate roof has a double chamfered outer
arch and octagonal reveals. The inenr door is mid C12 with side
shafts, cushion capitals, plain tympanum and an arch with an
order of chevron, roll moulding and crosses saltire to the hood.
The shaft bases also have chevron ornament. The early door has
overlapping planks with ledges to rear. Interior. On the north
side is a 2 bay early C13 arcade with circular pier, responds and
abaci with double chamfered arches. Eastwards ia later C13
double chamfered arch with octagonal responds to the transept
which balances a similar one to the south. Also in the south is
a triple shafted C13 double chamfered arch to the aisle. Offset
C14 continuously moulded tall tower arch of 3 waved orders. In
the south aisle is a piscina in square surround and in the east
wall a single chamfered pointed arch on corbels. In the south
transept is a triangular headed aumbry and in the east wall is a
mutilated and blocked C12 arch. The late C13 chancel arch has
octagonal responds and a double chamfered arch with above a C19
tiled text. In the chancel north wall is a late C13 double
chamfered arch with octagonal east respond and beyond a
triangular headed aumbry. In the south wall is an early C13
piscina with stiff leaf shafted reveals. Statue brackets to the
east wall. C19 tiled floor. The internal walls which are
unplastered show extensive signs of earlier phases and
modifications. Fittings. Are all C19 including panelled ashlar
pulpit with cusped arches. C15 tower screen, reset in 1879 with
central ogee arch and panelled ogee tracery. Plain octagonal C13
font on 4 short octagonal legs with narrow chamfered stem having
fine conical cover with C14 crockets, pinnacles and central knop.