A Grade I Listed Building in Hallaton, Leicestershire 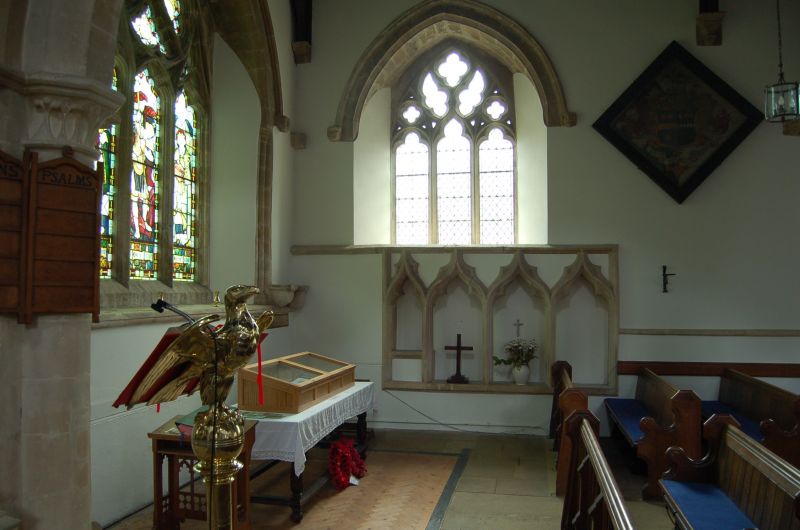 Church of England Parish: Hallaton St Michael and All Angels

HALLATON
CHURCHGATE (South Side)
Church of St. Michael and All Angels

GV
I
Parish Church, C12-C13, with additions in C14 and C15. Ironstone rubble with limestone dressings. West tower and spire, nave with two aisles and clerestory, chancel. C13 tower of three stages, the lowest of ironstone the rest limestone, with slim buttresses. Small west door in chamfered archway window over, and paired 2-light long lancet openings to bell chamber, in shafted recesses with nail head decoration, in the third stage. Corbel table and heavy C13 broach spire with stumpy pinnacles at angles and two tiers of lucarnes. Vestry of 1923 in south west angle. Early C14 south aisle is ashlar faced to sill level then ironstone, embattled parapet with gargoyles, and buttresses. Doorway in C15 porch with round shaft to outer arch and buttresses in plane of coped gable. Two coffin lids, probably C12 or C13 with crosses in low relief set against its internal east wall. C14 inner doorway, shafted with corbel heads. Aisle windows are of 3-lights with flowing Decorated tracery. Ironstone rubble to chancel with unprojecting ashlar sill band. Fabric probably C13. One Perpendicular low side window to south with square headed lights and two early Decorated plate traceried lights. East window is a Victorian restoration of 3-lights, flowing Decorated tracery in shafted recess. Traces of blocked doorway associated with staircase within in east wall. Large Rococo memorial against the north wall, to the Reverend George Fenwicke, d.1760; a high predella with swags flanking the inscription is capped by urns flanking a central block with shield of arms and volutes, surmourted by central obelisk and urns. C14 north aisle, incorporating masonry (visible in west wall) of narrower C12 aisle. At its eastern angle is a large octagonal turret, and there is a rib-vaulted chamber below. The turret is decorated with traceried panels, trefoiled and crocketted niches, and a quatrefoil freize and is surmounted by a pinnacle with fleurons. Quatrefoil freize continues across parapet of aisle. 3-light Decorated windows and doorway in C15 porch, the inner arch roll moulded and hollow chamfered. In the internal west wall of porch, a Romanesque tympanum is incorporated. It represents St. Michael triumphing over the dragon, with two tiny human suplicants in the lower corner.

Inside, the Church is below the ground level to the north. Nave arcades of four bays. North arcade is the earlier, C12. High bases to round shafts and capitals with square abaci. The capitals begin at the west with a simple fluted design and become more elaborate towards the east with ornate water leaf. The third shaft is octagonal belonging to an added C13 eastern bay. The arches are unchamfered and stepped and with outer hood mould. South arcade is C14, double chamfered arches on octagonal shafts. East and West responds seem to belong to an earlier arcade, cylindrical, that to east has capital with stylized and rather simple foliage on stalks. Squared C15 clerestory lights in splays with C18 glazing to north, paired foiled lights to south. C13 tower arch with clustered shafts and triple chamfered arch. Profile of former roof visible above it. Victorian tie beam and king post roof with bosses. Sill band in north aisle which has tie beam roof. Ogee archway to south door with outer hood mould on corbel heads. Sill course and hood moulds with corbel heads to south aisle windows. Sedilia. Victorian chancel arch, springing from very high corbels, with stone screen below. Windows set in shafted recesses. Sedilia and piscina in the same scheme, clustered shafts and richly moulded arches with nail head decoration. In the east wall an archway leads to the remains of a spiral staircase set in the thickness of the wall. Its purpose is unknown, but may have been associated with external pulpit, or sacristy.

Stained glass: in the chancel, the east window of 1899 is by Kempe as is one south west window and the east window of the south aisle. These latter are of 1882, and feature in the chancel window angels playing musical instruments, and in the aisle window arch angels, all with peacock feathered wings. Other chancel windows in a medieval style of 1820 and 1825, and in a Preraphaelite style to the north of 1886 and 1924, by Powell. Two brightly coloured windows in medieval style in the north aisle, c1870. Hatchment in south aisle, various C18 war memorials in chancel and in spandrels of north arcade. C13 font, a round drum-like basin with four shafts, forming angles; they are capped by heads of men, facing east and monster-like beasts representing evil, facing west. Saxon tomb slab in north aisle, with interlaced decoration. C18 charity board and C19 commandments board in the tower.

This List entry has been amended to add the source for War Memorials Register. This source was not used in the compilation of this List entry but is added here as a guide for further reading, 19 January 2017.