A Grade I Listed Building in Wilsford, Lincolnshire 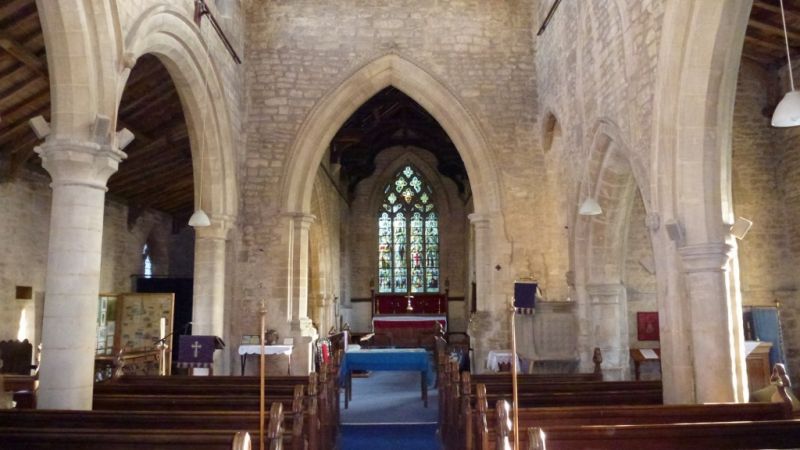 Parish church. C11, C12, C13, C14, C15, restored 1860-1 by Kirk and Parry.
Coursed limestone rubble and ashlar, slate and leaded roofs with raised
stone coped gables. West tower and spire, clerestoried nave, north and
south aisles, south porch. 3 stage C15 west tower with chamfered plinth and
string courses, stepped diagonal buttresses, fleuron frieze and embattled
parapet with gargoyles. The set back spire has 2 tiers of gabled lucarnes
in alternating directions. To the belfry stage are tall 2 light louvered
openings with cusped heads, quatrefoils and plain pointed surrounds. The
west door is pointed with trefoils in the sunk spandrels, all in a hollow
chamfered slightly 4 centred arched surround. Above is a 2 light window
matching those to the belfry stage. The west well of the north aisle
contains a 2 light C14 reticulated window in a wave moulded surround. To
the north side are 2 matching windows, one of 2 lights the other of 3
beneath a moulded and cambered head. Also a C14 priest's door with
continuously moulded and pointed surround. The C15 clerestorey has 3 broad
3 light windows on the north side with hollow chamfered 4 centred arched
surrounds. They alternate with elaborately cusped and pinnacled niches with
grotesque heads above. Embattled parapet to nave roof. In the east wall of
the aisle is a further 3 light reticulated window matching the rest. The
C13 chancel has a plain parapet and a single lancet in the north wall. C14
east window of 4 lights has fine flowing tracery forming mouchettes,
daggers and quatrefoils. In the south wall of the chancel are 2 further
lancets and a recut C14 2 light reticulated window. The south east angle of
the nave has quoins of long and short type. Immediately to the west is a
further C13 lancet. The C13 south aisle has a lancet to the east and in the
south wall is a broad 3 light C15 window with cusped heads to the lights
and crude perpendicular tracery set in a hollow chamfered triangular
surround. To the west is a small rectangular window in a plain chamfered
surround. In the west wall of the aisle is a C19 lancet. The southern
clerestorey has 3 pairs of trefoil headed windows in hollow chamfered
triangular surrounds. The C15 gabled south porch has a continuously moulded
outer 4 centred arched doorway with moulded hood and above a blank trefoil
headed niche. The inner doorway is C13, recut, with a pointed head and
plain chamfered surround. The principal timbers of the porch roof are
moulded and appear to be original. Interior: Tall 2 bay late C12 north nave
arcade with slender round pillar and cross-shaped capitals supporting
double chamfered round arches. The south arcade has one large C13 arch to
the west which is pointed and chamfered with annular shafted reveals, and
to the east a second smaller matching arch. Above this is a blocked pointed
window. Tall C15 tower arch with chamfered octagonal reveals, moulded
imposts and 4 centred arched head. The chancel arch largely dates from the
1860-1 restoration in its present form. It has octagonal shafted reveals,
moulded imposts and a double chamfered arch with dogtooth hood mould. In
each aisle is a plain aumbry and piscina. In the north wall of the chancel
is a broad C13 arch, double chamfered with dog tooth hood mould, all
supported on C12 triple shafted reveals with quirks and cushion capitals.
In the south wall are a plain aumbry and piscina. Fittings: All are C19,
including the panelled ashlar pulpit apart from the C15 octagonal font
which has sunk quatrefoils to the sides and stem. A reset door at the rear
of the nave appears to be part of a C14 oak screen with cusped ogee arched
panels, brattished midrail and traces of red and gold paint.