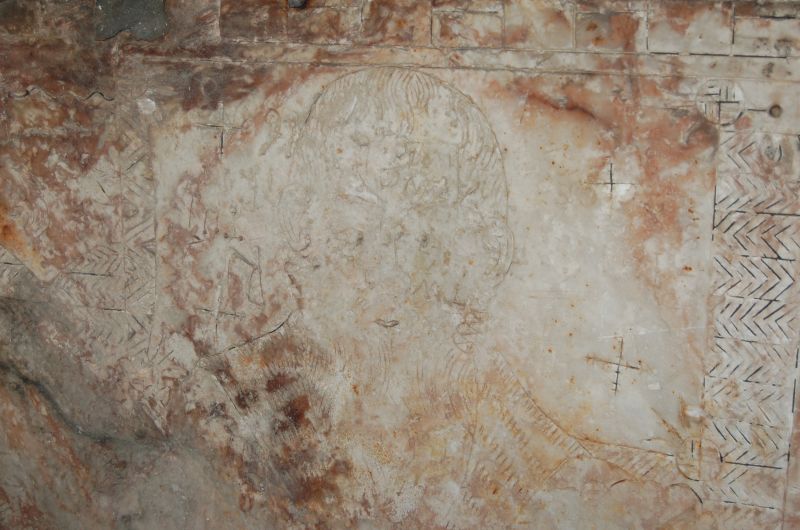 Parish Church. Mostly of the Decorated period (early C14) although the
chancel is of Early English origin. Coursed and squared limestone, but random
rubble to chancel. Plain tiled roofs. West tower and spire, nave with north
aisle and chancel. Buttressed West Tower of three stepped stages, with
occulus with fluted inner ring in West wall, shouldered arched doorway with
2-light foiled window above it in the South wall, 2-light windows and bell
Chamber lights above. Corbel table with carved heads, broach spire with two
tiers of lucarnes, and on the angles of the broach the stumps of pinnacles,
two of which survive against the South Porch. Victorian South porch arid inner
shafted doorway. Decorated reticulated tracery to aisle windows renewed.
Chancel of uncoursed small sized rubble, with blocked chamfered lancet to
South, and a 5-light Decorated East window. Blocked almost round headed
window in its North Wall and another possible blocked opening largely
concealed by buttress. Buttresses with gablets to North Isle and Decorated
tracery to its windows. Blocked North door with Ogee head. Inside wide west
tower arch, chamfered four sections each with semi octagonal respond. Four
bay arcade to North aisle, slender octagonal shafts supporting double
chamfered arches. Scissor braised Victorian rafter roof. All windows are in
shaftered embrasures most with foliate capitals. Victorian chancel arch on
short corbel shafts carried from Angel Heads: Victorian fittings to chancel
include solid stone pulpit in the arch, encaustic floor tiles and ornate wood
altar rails. Stained glass in the South aisle, C1860, small medallions
depicting miracle stories against a patterned background. In the North aisle
is a memorial alabaster slab to Thomas Corbett, the "Servant Sure in Pantry's
Rule" to Henry VIII, and the father of 21 children. The figure is engraved on
the slab witha long inscription and detailed background decoration of
chevrons and vine scroll. Two fonts: one is octagonal Victorian, but one C14
also octagonal but a canted basin with ribs.