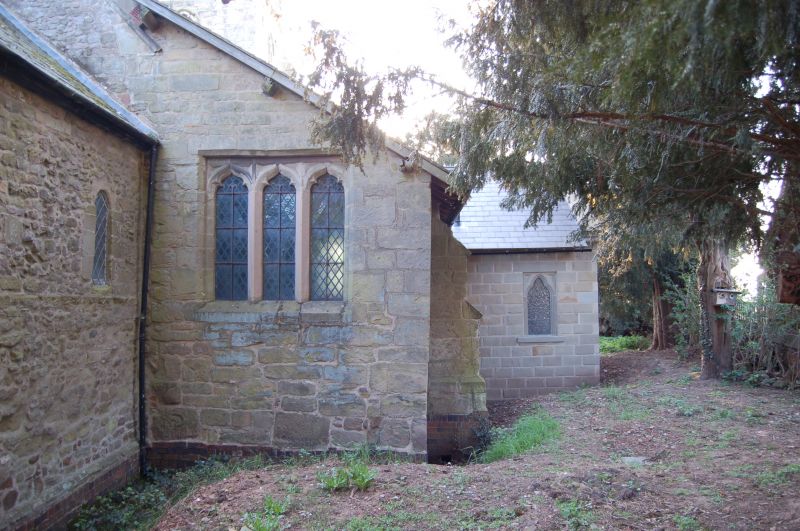 Parish church. C12 core; extended and remodelled in the early C14,
north aisle added in the C16; restored 1860. The nave, south aisle and
chancel are of random rubble with freestone dressings; the later
additions are in dressed freestone blocks; Swithland slate roofs with
stone copings. West tower, 2-bay nave with aisles and south porch,
2-bay chancel. 3-stage west tower with diagonal buttresses, parapet
string and crenellated parapet with moulded coping stones to merlons
and crenels. Recessed octagonal spire with 2 tiers of lucarnes in the
form of quatrefoils (c.f. Church of All Saints, Ratcliffe Culey,
Witherley c.p.; Church of St. Margaret, Stoke Golding c.p.). Pointed
west door, unchamfered and rather crude in appearance. Above it is an
ogee-headed lancet; the second stage has lancet lights to the south and
west, and the pointed belfry openings have Y-tracery with trefoil
cusping in the head of each sub-division. Nave and aisles: C12 south
door of 2 orders with scalloped capitals. The inner order of the arch
is roll-moulded but the outer roll is interrupted by triangular motifs
which are carved on every alternate voussoir. The gabled south porch
is late C19 and has a pointed doorway with a single order of colonettes
and a keel-moulded arch. C19 south aisle windows comprising paired
cinquefoil-headed lights; the east window of the aisle, however, is of
circa 1300 and is made up of 3 graded lights with cusped heads.
Restored window of similar type at the west end. There is a C19
buttress in the centre of the aisle and C14 diagonal buttresses at the
corners. The square-headed east window of the north aisle has 3 lights
with depressed trefoiled ogee heads. There is one similar window in
the north side and a 2-light version at the west end. All have sunken
spandrels. North door with segmental pointed arch. Chancel: C14
diagonal buttresses at the corners; C19 buttress at the bay division.
C19 square-headed windows to the south side each with 2 trefoil-headed
lights and hood mould terminating in carved heads. C19 pointed east
window containing 3 graded lancet lights with a trefoil in each head;
small C12 window with round arch, towards the west end of the north
side linked by a sill string to a similar blocked window at the east
end. Interior: C14 three-bay south arcade with pointed arches of 2
chamfered orders on octagonal columns with moulded bases and capitals.
2-bay north arcade with taller and wider arches but otherwise of
similar character. The tower arch is smaller and springs from engaged
semi-octagonal columns; the chancel arch is of the same scale and
character as the north arcade. C19 arch-braced collar roof over the
nave, and C19 scissor-braced roof over the chancel. Fixtures and
fittings: C12 font basin; plain and cylindrical; C19 font with
colonettes clustered around the pedestal, and circular basin. At the
east and south aisle is a piscina with lancet head; the projecting
basin has been broken away; this part of the church probably served as
a chapel. C19 slender wrought iron screen between nave and chancel.
Small C14 piscina in south wall of chancel with cusped triangular head
and projecting basin.
Monuments: Nicholas Purefoy, died 1545, and wife; alabaster chest tomb
at the east end of the south aisle with 2 incised effigies, arcaded
sides depicting weepers, executed in an early Renaissance style. In
the north aisle: George Purefoy, died 1628; canopied chest tomb with
recumbent effigy and Corinthian columns. Above and behind the effigy
are the kneeling figures of two of his three wives. On the side of the
chest are the kneeling figures of his children. Tablet to members of
the Purefoy family whose monuments had decayed: Thomas, died 1399,
William, died 1446, John, died 1447, John, died 1500, Thomas, died
1530, Ralph, died 1550; probably late C16/early C17. Tablet to William
and Jane Purefoy, made in 1637; it displays 3 coats of arms. In the
chancel: Edward and George Purefoy, died 1594 and 1593; massive double
monument erected in 1596; 2-bay arcade on Corinthian columns, the back
wall richly carved with strapwork. Stained glass: Late C19 east window
depicting Jesus the Good Shepherd in the central light, and geometrical
patterns elsewhere. B.O.E. pp. 152-3.