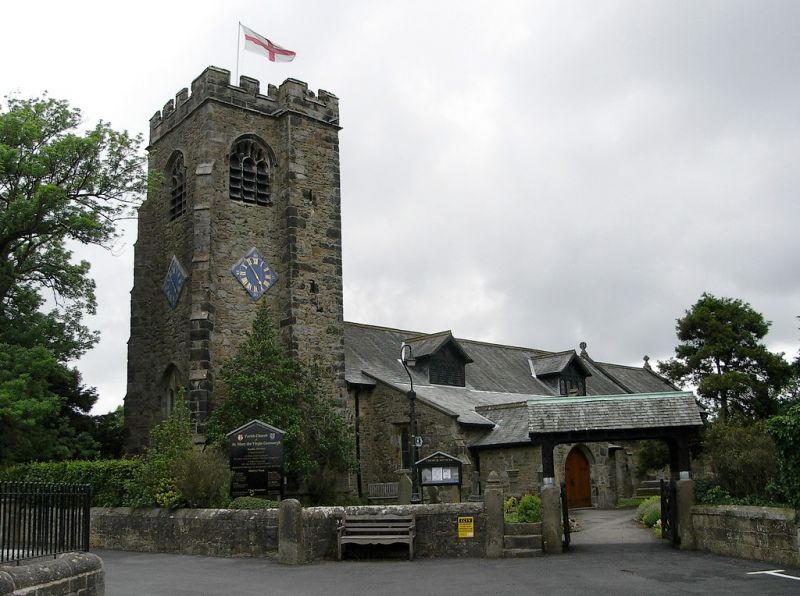 
Church, late medieval, altered or enlarged in late C16, restored 1868-9 and
1895. Mostly large sandstone rubble, slate roof (1868-9) with a 2 dormers
on south and 3 on north side. West tower, nave with full-height north and
south aisles, chancel. Three-stage tower, with full-height south-east
stair turret and diagonal 6-stage west buttresses, has on west side a
round-headed chamfered doorway with hoodmould, a 3-light window with
Perpendicular tracery; on west and south sides diamond-shaped clock faces;
and on all sides 3-light lourved belfry windows with Perpendicular tracery,
and an embattled parapet. Low buttressed south aisle of 4 bays, probably
late C16, has a gabled porch to the 1st bay, and a recessed square-headed
window of 2 round-headed lights with hollow spandrels in each of the other
3 bays; north aisle is late medieval, and has a blocked doorway to the lst
bay and 3 windows, all of 2 lights but otherwise differing: the first 2
have cinquefoil lights, the other has pointed lights of C14 type; and at
the east end of this aisle is a flush window of 3 round-headed lights (the
chancel wall adjoining has a similar 2-light window). The chancel has a
recessed 5-light east window with a transom at the springing and the lights
round-headed above and below this; on the south side a priest door, a
segmental-headed window to the right with a central cinquefoil and flanking
trefoil headed lights, and a 2-light window to the left like those in the
south aisle. Interior: north arcade of 6 pointed arches of 2 chamfered
orders carried on octagonal piers and responds with plain moulded capitals
and bases, south arcade similar but only 5 arches; roof of roughly-hewn
ties and principals with angle struts and arch-braced collars, except the
truss at the junction with the chancel which has a crown post and
decorative framing; chancel roof of roll-moulded beams supported by short
wallposts on corbels; at east end of north aisle a wooden screen to the
Middleton Chapel, with turned balusters in the upper part and a door in the
west side, the top rail carved and lettered on the west side "TR 1721" and
on the south side "AR 1622" (Thomas and Alexander Rigby); within this
enclosure an elaborately carved C15 tombstone; in tower arch another wooden
screen with turned balusters on the top, and a central door lettered
"RC IL II JW 1678" (formerly part of rood screen). References: VCH Lancs:
Fishwick Goosnargh pp. 10-25. A. Hewitson Our Country Churches and
Chapels Preston 1872, pp. 70-77.