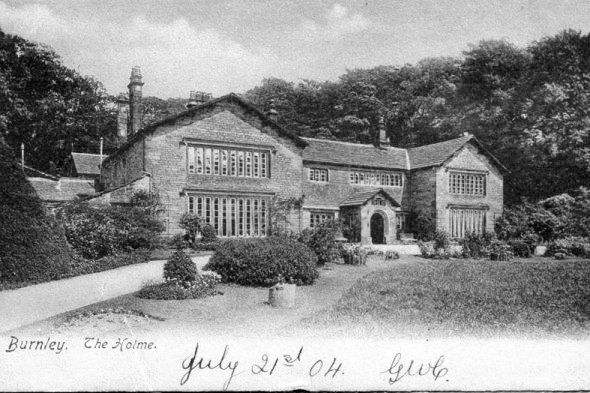 House, now (1985) old people's home. Probably early C17, with extensions and
alterations date variously 1717, 1796 and 1854. Coursed squared sandstone,
mostly watershot, stone slate roof. Now modified H-plan, incorporating hall
range and east (right) wing of C17 build, and west wing rebuilt in early C18,
with 1854 additions to rear making a rear courtyard (now enclosed). Two
storeys; hall range has former doorway (altered as window) close to the angle
with the left wing, a moulded dripcourse stepped over this and continued over
recessed mullioned ground floor windows of 4 and 4 lights but broken in the
centre between these by a C19 gabled porch to an inserted doorway; and at 1st
floor similar windows of 2, 3 and 5 + 5 lights (with a king mullion): all
these windows with ovolo-and-fillet mullions. Gables of both wings have
C17-style recessed mullioned windows in elongated form of c.1800, with
hoodmoulds: 10 lights on each floor of left wing, 8 on each floor of right
wing; both wings have projecting eaves supported on moulded brackets.
Re-entrant angle of right wing has downspout bracket dated 1796. Return wall
of left wing has two tall recessed chamfered-mullion windows of 2 lights, a
datestone between them with raised lettering W ; and towards the rear
T A
l717
2-stage flush mullion window with 4-lights above and 2 below, all these at 1st
floor (ground floor covered by additions). Return wall of right wing has
various recessed mullion windows. Rear (and rear wing) in similar style, has
inter alia at gabled stair turret with large 3-stage mullion-and-transom
stairlight. Interior: extravagent C19 fittings and decoration in C17 style,
including staircase with stained glass window, beams, panelling, and
fireplaces with carved wooden overmantels; wide arched stone fireplace with
flanking round-headed doorways (a feature original to some contemporary houses
in this area, and perhaps also here); at lst floor a water closet with
exceptionally wide panelled wooden seat with arm rests (probably early
Victorian, designed to accommodate the crinoline). History: home of the
Whitaker family (T.D. Whitaker, historian). Reference: RCHM pp. 140-1.