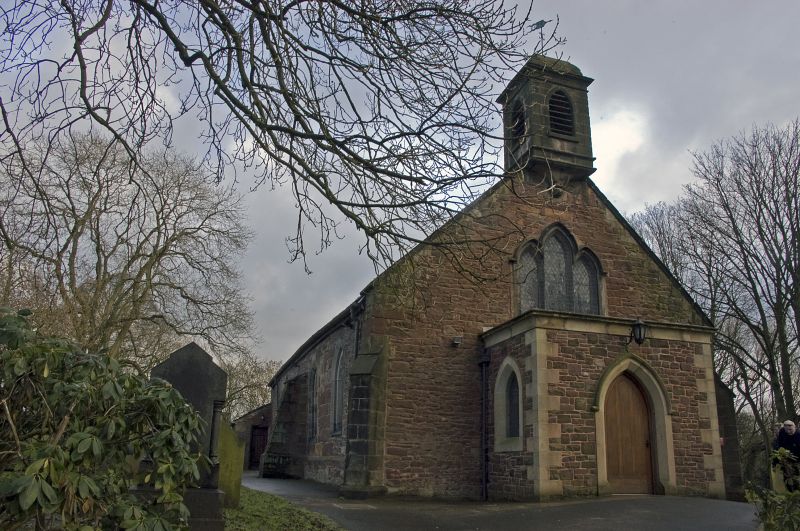 Church, probably C14 and late medieval (restored), with 1837 chancel.
Sandstone rubble, stone slate roof. Small aisleless building, with some
evidence of early rebuilding (see below, "History"). West front has
diagonal buttresses, C19 arched doorway with hoodmould, a datestone over
it lettered 1573 IDP (date may be "1513"); above this a C19 stepped
R M
A° dmi
triple-lancet window with hoodmould following the heads, and on the apex
of the gable a part-corbelled square bellcote of ashlar (possibly early
C18). North side wall has a large buttress in the centre, left of it a
low doorway with 2-centred double chamfered arch, and three 2-light
windows similarly-arched with cusped tracery; masonry of this wall,
incorporating some large dressed blocks, shows evidence of some early
alterations. South wall has a similar buttress and 4 similar windows,
of which the 1st and 3rd appear to be original; arched tear-line in wall
near east end marks position of a former south doorway. Interior: single
vessel (plus small C19 chancel); arch-braced kingpost roof (probably C16)
with 2 tiers of cusped windbraces (westermost truss is modern copy);
south wall has coupled piscina and sedile with moulded round arches and
hoodmoulds; north wall incorporates aumbry. History: formerly known as
Burgh Chapel, and said to have been built (1513) by Sir Wm. Molyneux
(lord of the manor) as chapel-of-ease to Leyland Parish Church; was
retained as Molyneux private property (and little-used Catholic chapel)
from Reformation until transferred to the Established Church in early C18.
(Pevsner: VCH Lancs; A. Hewitson: Our Country Churches and Chapels).