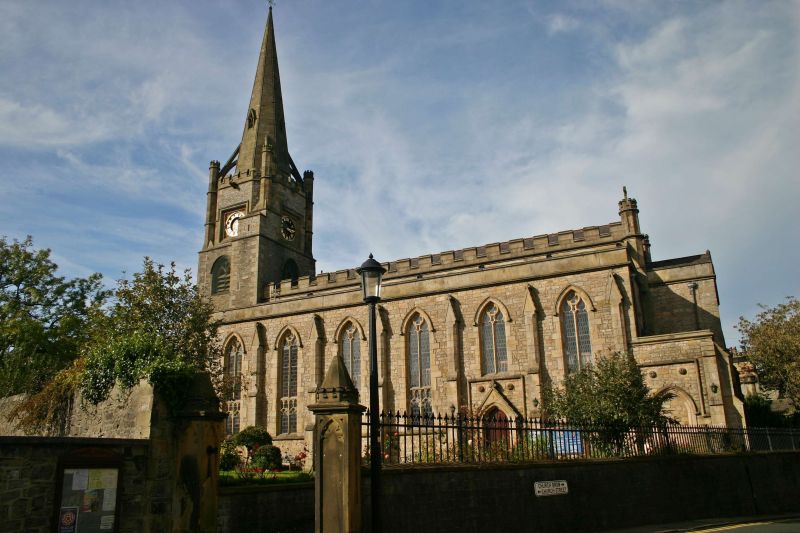 EXTERIOR: The Perpendicular four-stage west tower has angle buttresses in the lower two stages, and square south-east stair turret. The west doorway has two orders of continuous hollow chamfer, and C19 ribbed doors. Above is a three-light window. The second stage has narrow square-headed windows and in the third stage, which was formerly the bell stage, are two-light windows. The mid C19 upper stage has deep chamfers to accommodate the octagonal angle turrets, which are carried above the embattled parapet. Round clock faces in square frames are in the main directions. The stone spire has flying buttresses and lucarnes. The six-bay nave has two-light square-headed clerestorey windows and an embattled parapet, with octagonal angle turrets over the east end. Aisles have plain parapets, buttresses with gable caps, two-light Decorated west windows and tall two-light transomed north and south windows with Decorated tracery. On the south side the 5th bay has a doorway in a projecting gabled surround, with continuous moulding and ribbed door. In the corresponding bay on the north side is a doorway to a link to a late C20 vestry. The chancel east wall is C15, with diagonal south-east buttress, but the angle north buttress and five-light Perpendicular east window are mainly C19 fabric, as is the cusped window in the embattled gable. The south chapel has a blocked doorway and square-headed two-light east window. The two-storey north vestry has a similar blocked north doorway and two-light east window, below a triangular window with curved sides in the east wall.

INTERIOR: The interior is impressively lofty and designed to accommodate galleries in the aisles of the Georgian rebuilding, but the tall tower arch, with two orders of continuous chamfer, indicates that the previous church also had a tall nave. The nave arcades have tall octagonal piers and two-centred arches with linked hoods. The chancel arch is similar but on corbels. The nave roof of 1898 combines hammerbeams and arched braces, with arcading above. Aisles have tie-beam roofs on corbelled brackets, with arcading above the beams and boarded undersides. The chancel has a boarded keeled wagon roof and, in the south wall, a C14-C15 ogee-headed cusped piscina. Walls are plastered except for exposed masonry in the nave. The chancel has stone-paved floor of c1980.

PRINCIPAL FIXTURES: North and south galleries are carried on cast-iron posts and segmental timber arches. The gallery front has blind arcading. Gallery stairs are in the aisles and have Gothic balustrades. Gallery benches have shaped ends with sunk quatrefoils and are probably of 1898. Nave and aisles have similar benches also said to be of 1898 (Rickman's plan of the church suggest that originally there were box pews). The plain octagonal font is said to be C17 but is on a C20 base. Most of the other fixtures are later. The polygonal pulpit was brought here in 1979 from Darwen St John. Priests' stalls have ends incorporating poppy heads and linenfold panelling. C20 Choir stalls by John Higson have moulded ends and fielded-panel backs incorporating some linenfold panels. The communion rail is on wrought-iron uprights with scrolled brackets. There are several monuments reinstated from the old church. In the south chapel are damaged mid C15 effigies, said to be Sir Richard Radcliffe (d 1441) and his wife Catherine. Small brass inscription panels include memorials to John Webster (d 1682), astrologer, metallurgist and headmaster of the local grammar school, and John Harrison (d 1718) by F. Ainsworth. The latter was taken from a tomb chest, which is now used as an altar in the south aisle. In the chancel north wall is a hatchment and wall tablets to the Aspinall family, namely John Aspinall (d 1784) John Aspinall (d 1851) by the Westminster Marble Co, and John Aspinall (d 1865) by Poole & Sons of Westminster. On the south chancel wall is a Gothic wall tablet to Thomas Wilson (d 1813) by Richard Westmacott. The north aisle has a memorial with portrait bust to James Thomson (d 1851) by F. Webster of Kendal (the bust is possibly by Thomas Duckett of Preston), and Thomas Southwell (d 1796). In the north aisle is an alabaster 1914-18 war memorial with roll call in raised letters on cast metal panels. The east window of c1828 has heraldic glass, possibly by James Hall Miller. There are fragments of medieval glass in tracery lights.

HISTORY: An earlier church was granted to the Priory of St John, Pontefract, in 1122. The principal surviving element is the west tower. The east end of the chancel, including a piscina, is also C14-C15. The remainder was rebuilt by Thomas Rickman (1776-1841). Rickman entered the architectural profession in Liverpool, and made his name in 1817 when he published the influential `An Attempt to discriminate the Styles of Architecture in England'. His many churches are characterised by a combination of credible Gothic design and Georgian planning. He was in partnership with Henry Hutchinson (1800-31), with whom he designed his best-known secular work, the New Court with its Bridge of Sighs, at St John's College, Cambridge (1826-31). Clitheroe is typical of Rickman's work, and the style of the 1820s, in having a nave with aisles, but also galleries and short chancel: this considerably enlarged the capacity of the church, in keeping with the town's expansion. An octagonal stage was added to the tower, with a spire, in 1844. The architect is not known but `Mr Sutcliffe' is mentioned as a sculptor. The church was restored in 1898 when the nave clerestorey was added by Frederick Robinson (1833-92), architect of Derby, and new seating was installed. The south-aisle roof and gallery were partially reconstructed after a fire in 1979.

REASONS FOR DESIGNATION: The church of St Mary Magdalene, Church Street, Clitheroe, is designated at Grade II* for the following principal reasons:
* For the significant surviving medieval fabric of the tower and the chancel.
* The church is a good example of the work of Thomas Rickman, an important pioneer of Gothic-revival architecture in the early C19, and is one of a minority of churches of the period that has retained its galleries.
* The interior has monuments of special interest, including C15 effigies, C17 brass and early-C19 Gothic tablet by Richard Westmacott, a prominent monument designer.
* The church is prominently sited near the centre of the town and makes an important contribution to the historical townscape.