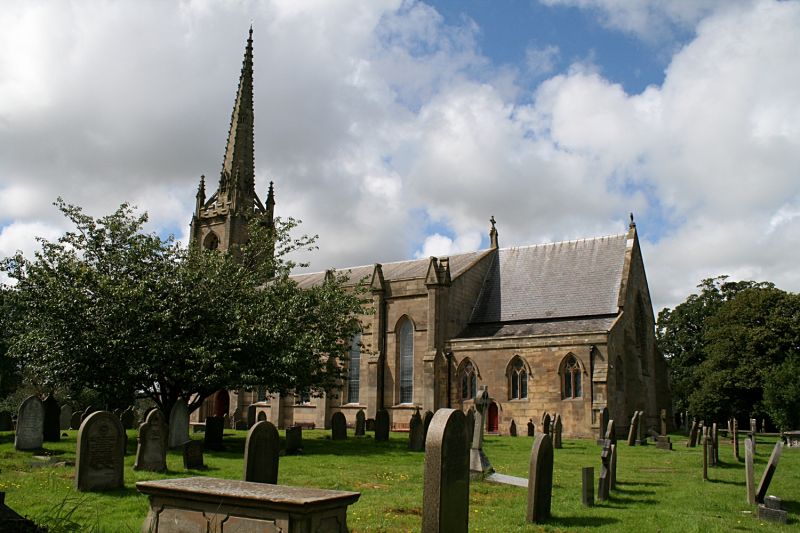 Anglican church: nave (built on foundations of previous church) by
Robert Roper 1823; tower and spire added by Edmund Sharpe 1844; chancel
rebuilt probably by Joseph Hansom to make the altar visible from the nave
1853. Sandstone ashlar with slate roofs. Unaisled nave of 6 bays with
Early English details. Second bay from west on both sides is occupied by a
slightly projecting porch under a gable. All other bays have lancet
windows with chamfered reveals set under a continuous hoodmould and between
gabled buttresses which are square below, and semi-octagonal above, the
offset. The west windows of the aisles have 3-light windows with
Perpendicular panel tracery and were therefore probably inserted when the
tower was built. This has angle buttresses and is built in 4 stages with a
deeply moulded west door, a 4-light window of panelled tracery set above an
embattled string course and below a quatrefoil frieze, a plain panel for a
clock face, and 2-light belfry openings on each face. The crocketed
octagonal spire rises to 150 feet (40 feet more than the roughly
contemporary Roman Catholic church of St. John the Evangelist (q.v. under
Ribby Road). It has 3 tiers of 2-light lucarnes and is set behind an
embattled parapet with corner pinnacles and supported by 4 small flying
buttresses. The aisled 3-bay chancel has Decorated details in keeping with
the 5-light east window) which has reticulated tracery in a deeply moulded
reveal (possibly C14). 2-light windows with varied tracery in aisles.
Most of the stonework of the east and north walls of the chancel is reused.
Interior: Wide nave with flat-panelled ceiling apparently supported on 7
very shallow wooden braces whose spandrels are decorated with quatrefoils;
intersection of ribs embellished with gilded leaves and, occasionally,
heads. Of the three original galleries only the west one now survives,
with a Gothic-panelled front; it is supported on slender cast-iron piers of
quatrefoil section and approached up two flights of stairs with open
strings and slim turned balusters. Original west door now leads into
tower. Richly moulded chancel arch with moulded capitals and filleted
shafts. Chancel has aisles (now vestries) closed off by glazed screens
with ogee arches and ball flowers. Chancel roof is open with 4 trusses
whose braced collars support crown posts and upper collars; three tiers of
wind braces; decoration of stencilled flowers. There are several fittings
of interest: churchwardens' box pews (east of south door) with Gothic
details and poppy heads, dated 1770 on a brass plate which is probably not
in situ; C14 tomb recess (in south east corner) with pierced curvilinear
tracery; wall tablet above the recess, with Baroque scroll work above a
winged skull framing a long epitaph, partly in rhyming couplets, to
commemorate Thomas Clifton of Lytham Hall who died in 1688 (though Roman
Catholics, the Cliftons leased the rectory lands from
Christ Church College, Oxford); another wall tablet nearby, with a
medallion representing the Resurrection, commemorates Richard Bradkirk of
Bryning Hall (died 1813); mid C18 former entrance to the France family
vault (east of north doorway) with a semi-circular arch with moulded
architrave and block keystone and leaves in spandrels, set between engaged
Ionic columns carrying a broken pediment and a coat of arms within Rococo
cresting; two tier brass chandelier (bought in 1725 for 11 gns from
Brown of Wigan) suspended over nave.