A Grade I Listed Building in Lancaster, Lancashire 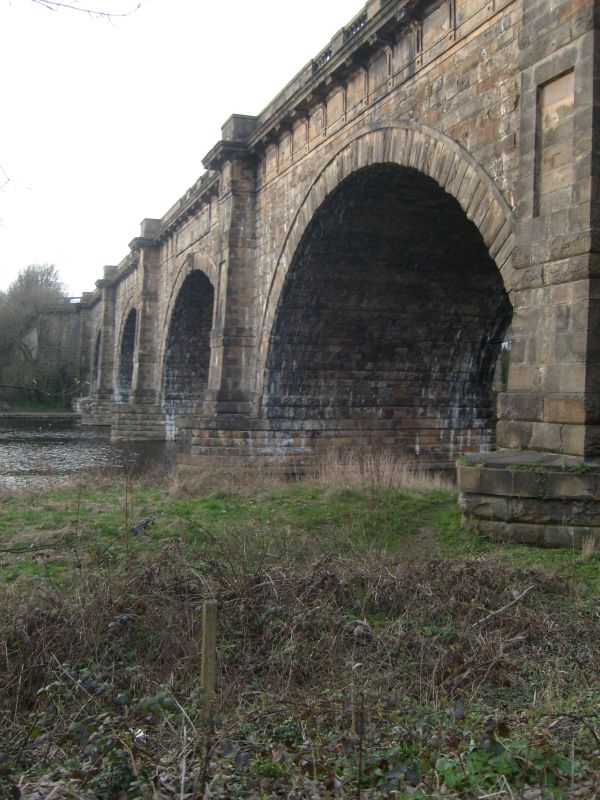 Aqueduct over the River Lune, Lancashire

The Lune Aqueduct is one of the most out-standing features of the Lancaster Canal, often being referred to as a masterpiece of civil engineering. It carries the canal 664 ft (202.4m) across the River Lune at a height of 61 ft (18.6m).

PLAN: The aqueduct consists of five semi-circular stone arches supporting a stone trough, separated by panelled buttresses above triangular cutwaters. The supporting piers rest on piles of specially imported Russian timbers driven deep into the bed of the river. The parapet has 3 balustraded openings over each arch.

The piers themselves were of hollow construction, built in stone and strengthened by iron bars. When completed, the hollow centres were filled in with rubble. Huge coffer dams held back the river and the water was pumped out using primitive steam engines. Wooden scaffolding was used to support the structure of wedge shaped stones. These formed the masonry arches until each of the final keystones was in place.

The trough carrying the 20 ft (6.0m) wide canal over the aqueduct is semi-circular, and is now concrete, but was originally lined with stone. Its curving side walls were 18 ins (46cm) thick and the bottom was 1 ft (30cm) deep with 3 ft (90cm) of puddled clay to make it watertight. The bottom of the channel contains a plug which could apparently be pulled to allow the aqueduct to be drained into the river to allow repairs to be undertaken.

SUBSIDIARY FEATURES: The west side the central arch has a keystone carved to represent Lancaster Castle Gateway, and includes a latin inscription which translates as "Old needs are served, far distant sites combined. Rivers by art to bring new wealth are joined”. This is followed the names and dates of the designer and architect: 'QUAE DEERANT ADEUNT: SOCIANTUR DISSITA: MERCES FLUMINA CONVENIUNT ARTE DATURA NOVAS. A.D. MDCCXCVII. ING. I. RENNIE EXTRUX. A. STEVENS. P. ET F.'

On the east side in the same place is the inscription 'TO PUBLIC PROSPERITY.' Below the parapet is a Doric entablature having a strongly projecting cornice.

The Lune aqueduct was designed by Lancashire Canal engineer John Rennie, and it is often claimed to be his best work. It took three years to build and was completed in 1797 at a cost of £48,321. The building itself was constructed by Scottish architect Alexander Stevens, who died before it reached completion, with his work on the aqueduct being completed by his son.

Work began to restore the aqueduct in January 2011, and was completed in March 2012. The work involved restoring the canal channel, masonry repairs, removing graffiti, and improving public access. The project cost £2.4m, and was funded by British Waterways, Lancaster Canal Trust, English Heritage and the Heritage Lottery Fund.

This structure was first listed at Grade I in 1953, when two list entries were created as the aqueduct spanned two parishes. In 1967 the aqueduct was listed again, this time at Grade II*, which may have been an administrative error. Since 2011 there has been only one list, rather than one per county, therefore the other entries have been removed to leave this one, single entry at Grade I.

Lancashire Canal Lune Aqueduct is listed at Grade I for the following principal reasons:

Historic interest: the Lancashire Canal system, and associated buildings, designed by celebrated engineer John Rennie, who also laid out Rochdale Canal, Aberdeen Canal, the Crinal Canal, the Royal Canal of Ireland, and the Royal Military Canal; and was a key figure in the expansion and improvement of a number of London docks during the Napoleonic wars of the early 1800s;
Degree of survival: largely in it's original form, with only minor alterations such as the lining of the channel with concrete;
Date: very early canal structure, having been completed in 1797.