A Grade I Listed Building in Thurnham, Lancashire 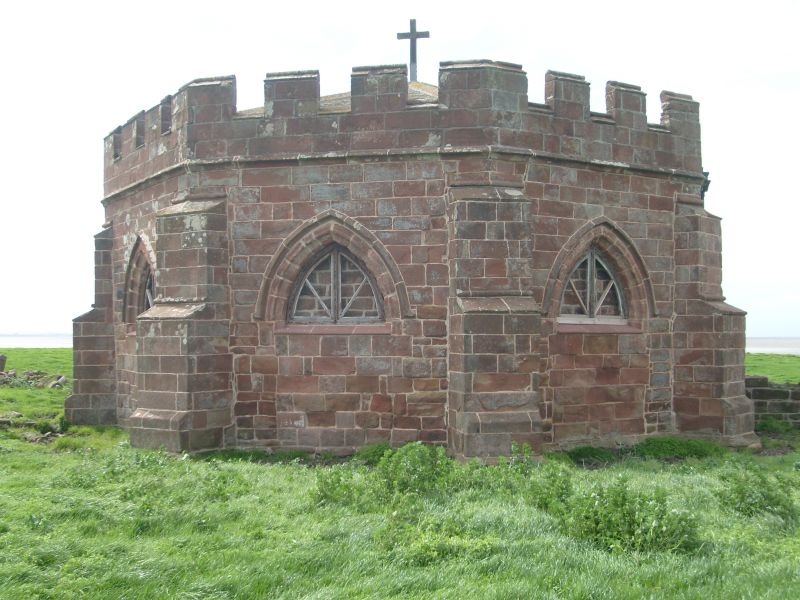 Chapter house of Cockersand Abbey (Premonstratensian, founded 1180-90), early
C13th, converted into burial chamber for Dalton family probably mid C18th.
Red sandstone rubble with slate roof. Octagonal plan, now squared off on west
side to make it appear externally as a rectangle with a 3-sided projection at
the east. The west wall appears to be much rebuilt and has a doorway, now
partly blocked and with a smaller door, with a round arch moulded in 2 orders
and capitals for angle shafts, now missing. The 3 sides visible from the east
have an embattled parapet, and buttresses with offsets at their angles. Each
side has a blocked window with a sill at the level of the springing of its
moulded pointed arch. The mouldings are made with cement, and rebuilding
below sill level suggests that the openings were once larger. Inside, a
vaulted roof with foliated bosses is carried on a central compound pier with
stiff-leaf capital. The stonework is limewashed and some of the details,
including the carved head stops to the hood moulds, have been restored in
cement. The walls are arcaded, with pointed arches moulded in 2 orders with
angle shafts, the outer ones now missing. Some of the arches are filled by
inscribed slate memorials to the Dalton family of Thurnham Hall (q.v.),
including Robert Dalton (d, 1785). Scheduled Ancient Monument. A plan,
section and elevation, together with Buck's engraving of 1727, are reproduced
in Swarbrick, J. 'The Abbey of St. Mary-of-the-Marsh at cockersand',
Trans. Lancs. & Ches. Ant. Soc., vol. XL, 1922-3.