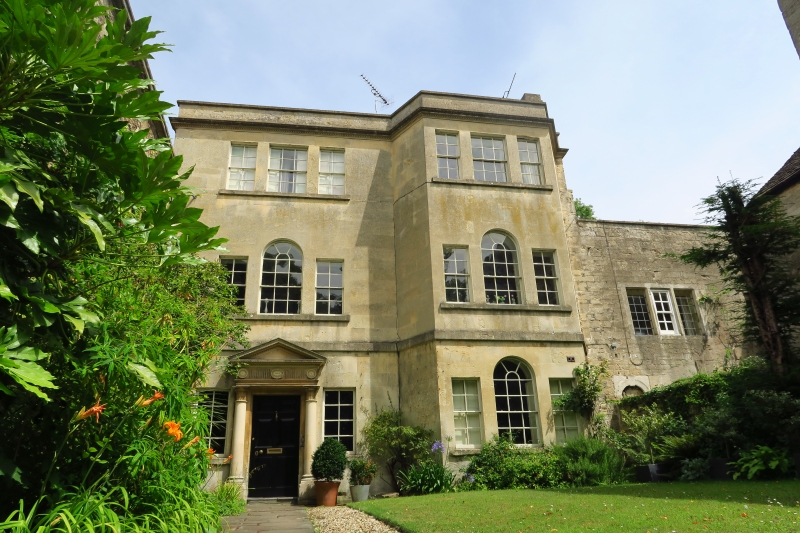 GV II*
Lynchetts is a three-storey townhouse of Bath stone ashlar on the south east side of Bradford upon Avon. It was built in 1785 and has an earlier core. The architect is unknown.

PLAN: Lynchetts is roughly rectangular in plan. Historic maps indicate it may once have been a symmetrical block with a canted bay on either side, and in the C18 was built upon and around.

EXTERIOR: There are two bays to the principal elevation, which has a segmented Venetian window arrangement on the right-hand bay of the ground floor, and on each of the first-floor bays. The second storey uses the same vertical window alignment but without the semi circular headed central light. There is a string course between ground and first floors, and a moulded cornice below the parapet. The doorway; which is on the westerly bay, is a plain opening with an Adamesque door case with pilasters with fluted necking, a moulded architrave with a fluted frieze with three paterae, a dentilled cornice and pediment. The roof is not visible beyond the parapet.

SUBSIDIARY FEATURES: To the front, the building has rusticated stone gate piers topped by urn and ball-capped finials. A low, rough stone wall extends from the gate pier to the building to the right, creating a forecourt. The railings and gates are plain wrought iron.

HISTORY: During WWII the building was requisitioned and used to temporarily house the collection of John Harrison's groundbreaking C18 marine chronometers, which were moved for safekeeping from the Royal Observatory in Greenwich.

REASONS FOR DESIGNATION: Lynchetts, a C18 townhouse, is designated at Grade II* for the following principal reasons:
* Date: an C18 dwelling that contains an earlier core dating from the C17
* Architectural interest: Lynchetts is a striking example of a Georgian house, displaying high-quality design and architectural detailing
* Group Value: it forms part of an important group of houses, most of which are listed at Grade II, some at Grade II*
* Historic interest: It was the temporary home of the internationally significant Harrison marine chronometers removed for safekeeping from The Royal Observatory in Greenwich during WWII