A Grade I Listed Building in Yaverland, Isle of Wight 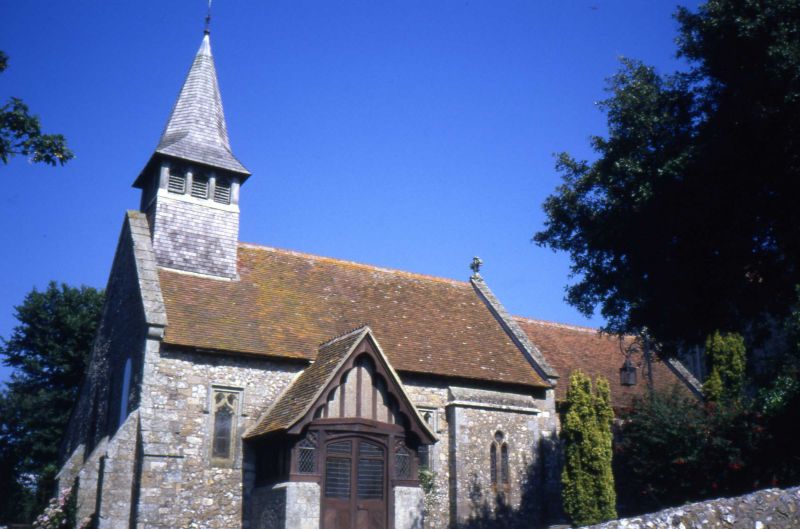 Church. c1150 nave and chancel built as a private chapel by
the de Aula family of Yaverland Manor, with some late C13
windows by the Russell family of Yaverland Manor and C15
Perpendicular chancel windows, hagio-
scope and opening for rood loft dating from the period when
the building became a parish church, with North aisle, organ
chamber, vestry and bell turret added by Ewan Christian in
1889. Built of stone rubble with tiled roof. 2 bay nave,
smaller and lower 2 bay chancel, north aisle, bell turret and
south porch. Nave: west gable has 3 C19 lancets and
buttresses. East gable has C19 cross-shaped saddlestone. South
side has window with cinquefoil-headed light with hood
moulding and further C19 double lancet with circle above.
North aisle has cinquefoil-headed lights. South doorway of
cll50 has one order of columns and a tympanum with a small
chip carved repeat pattern. Arch has unusual motif of raised
radial bars and hoodmould has zigzag pattern. Human mask set
above this. Mass dial carved into left-hand side. Consecration
cross carved on right jamb of doorway. South porch c1889, base
of stone, above wooden with cinquefoil cinquefoil patterned
lights. Gable has carved bargeboards and Tudor arched door
with trefoil in spandrels. Chancel has 2 double
cinquefoil-headed lights and C19 cross-shaped saddlestone to
apex of gable. Bellcote situated at west end of nave has
square base with louvred bell chamber having trefoil heads and
broached shingled spire surmounted by a cock weathervane.
Interior C15 pillar piscina by south door. C12 or C13
octagonal stone font. The arches to the north aisle are by
Ewan Christian, the end ones octagonal, the centre ones
circular. C19 roofs. Norman chancel arch with 1 order of
columns with zigzag decoration and zigzag decoration above
arch. C15 hagioscope south of the chancel arch and triple
window above chancel arch with cinquefoil heads in Tudor arch.
Remains of stairs to roof loft. Chancel has piscina with shelf
to south of altar, probably C19. Marble and mosaic reredos by
C E Ponting with figures by Frampton. Windows in south wall of
nave by Hardman; St Raphael and St Gabriel in the west wall of
the nave by Burlison and Gryllo and east aisle window by
Wailes and Strang.