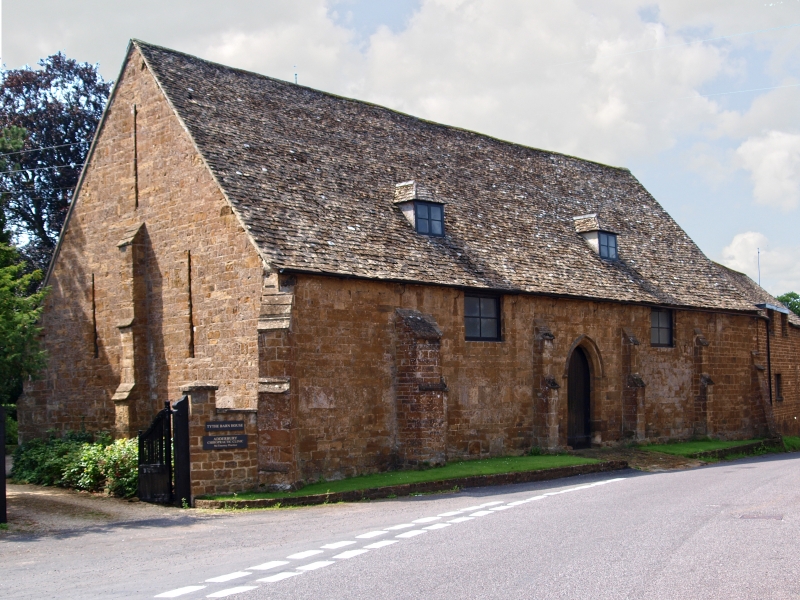 GV II
Tithe barn. Completed c.1422 for New College, Oxford; probably reduced and
partly rebuilt C17; altered c.1877 for Lord Haldon. Marlstone ashlar with some
limestone-ashlar dressings; Stonesfield-slate and concrete plain-tile roof.
5-bay plan, probably originally longer. Road front has 6 stepped buttresses, the
westernmost probably Cl7, and has a central doorway with a pointed chamfered
arch and a hood mould. The unaltered left (east) gable wall has 3 buttresses,
the angle buttresses set diagonally, and has 3 long slit openings. At the rear
only the 2 easternmost buttresses (including the angle buttress), are medieval;
the raking westernmost buttress is probably C17, and there are three C19
buttresses with limestone dressings. The walling of the middle bay replaces an
earlier wide porch or doorway, the jambs of which are visible internally. The
west gable wall, partly obscured by lower farmbuildings (now Tythe Barn House),
is probably C17 but contains a wide C19 doorway with a shallow depressed arch in
limestone ashlar. Both sides have 2 square C19 windows set below the eaves, and
have 2 hipped roof dormers. Interior: slits have wide splays and pointed
rere-arches; medieval doorway has a chamfered segmental rere-arch. 5-bay roof
has two C17 trusses, each with tiebeam plus 2 collars supporting 3 rows of butt
purlins, but the 2 westernmost trusses are largely original with saddles at the
apex, 2 collars, (the lower renewed), and mortices for arched braces; the
westernmost appears to be the only truss to have remained in situ, and retains
its curved feet set into rebates in the wall. The construction of the barn bears
a strong resemblance to the other early-C15 New College barns at Upper Heyford
and Swalcliffe, and John Jylkes, carpenter, is known to have worked at all three
places. The barn was associated with the rectorial manor house, now The Grange
(q.v.), which was rebuilt in 1684.
(Buildings of England: Oxfordshire: p416; VCH: Oxfordshire: Vol IX, pll; R.B.
Wood-Jones, Traditional Domestic Architecture in the Banbury Region, 1963,
pp20-22)