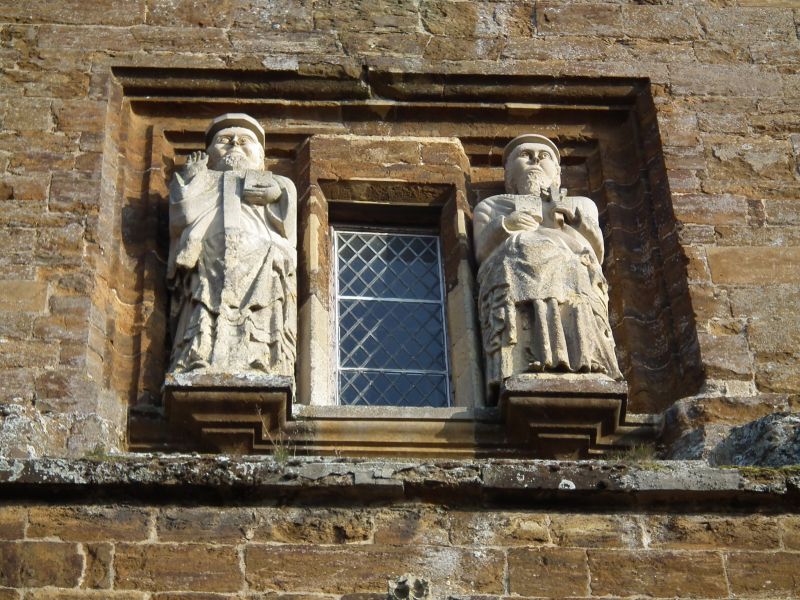 SP4631 DEDDINGTON CHURCH STREET
(North side)
8/153 Church of St. Peter and St.
08/12/55 Paul
GV II*
Church. Early C13, late C13, C14 and C15; tower rebuilt and church repaired
mid/late C17; repaired 1843, and restored 1858-68 by G.E. Street. Coursed
squared marlstone with limestone-ashlar dressings; lead roofs. Chancel, vestry,
nave, north and south aisles and porches, west tower. Early-C13 chancel was
lengthened to 4 bays in late C13 and has 2-light windows with Y tracery
separated by buttresses; one bay on the south has been altered to accommodate
the organ and the C19 vestry projects on the north. Both sides have restored C15
square-headed clerestory windows in contemporary walling. Large 3-light east
window with geometrical tracery is by Street. Broad south aisle has, to east, a
Tudor-arched window with 4 cinquefoil-headed lights above an arched subterranean
entry to the crypt. South wall has, to right, a fine 5-light early-C15 window
with drop tracery in a 4-centre-arched casement-mould surround, which is
attributed to Richard Winchcombe, the designer of the chancel at Adderbury
Church (q.v.); a 3-light early-C14 window has cusped intersecting tracery, and a
3-light C15 window to left of the porch has a depressed arch and drop tracery
incorporating a transom. C19 porch is flanked by chamfered arched recesses in
the aisle walls, and it shelters a C13 doorway with a deeply-moulded arch.
5-light west windows of aisles, with intersecting tracery and head stops, are
C17 and contemporary with the tower; a plainer 3-light window in the north wall
is probably also a restoration of the same date. C17 north porch has a moulded
Tudor-arched doorway and a quatrefoil-panelled parapet with corner pinnacles;
two 3-light C14 windows to left of it have geometrical tracery. East window
matches that of the south aisle. Nave clerestory has, each side, six 3-light
4-centre-arched windows with Perpendicular drop tracery, and has a 4-light
window over the chancel. All roofs are shallow pitched and have plain limestone
parapets. Tower, rebuilt after its fall in 1634, was not completed until c.1683.
It is of 4 stages with massive diagonal buttresses, and has a crenellated
limestone parapet with 8 large crocketed pinnacles. Moulded 4-centre-arched west
doorway has hood-stops carved as an eagle and a monkey, and above it is a
Classical entablature carried on bulbous pilasters. 4-light west window has
Gothic-Survival tracery, and above it large re-used stone figures of Saints
Peter and Paul flank a rectangular window. Bell-chamber stage has 2-light
openings with Y tracery, and on the east are 2 moulded lead C18 rainwater heads.
Interior: chancel has a fine late-C13 sedilia and piscina, incorporated in a
4-bay arcade with detached shafts and leaf capitals. C13 chancel arch of 3
chamfered orders, the inner a C19 restoration. 4-bay nave arcades, of 2
chamfered orders with circular and octagonal columns are C13 but were probably
partly rebuilt in C17. Tall tower arch is C17. South aisle has a mutilated c14
piscina, a chamfered tomb recess above which steps rise, and a tall doorway
formerly leading to a wall stair. North aisle has a C13 piscina, near the
blocked entry to a rood stair, and the early-C13 north doorway, now internal,
has a fine moulded arch and detached shafts with stiff-leaf capitals. North
aisle roof, with moulded cambered beams, is probably C17; nave roof may
incorporate old timbers but was rebuilt 1843; south aisle roof is C19 and
chancel roof C20. North porch has a unusual C17 stone saucer vault. Fittings
include a fine traceried C15 screen, a font of 1664 and C18 communion rails, but
are mostly C19. Monuments include a C14 effigy of a judge, part of a late-C14
brass, and a small panelled chest tomb with indented reredos and a fragment of
the brass inscription to William Billing (d.1533); Baroque wall tablets
commemorate Beta Belchier (d.1686) and Francis Wakefield (d.1730). Small
painted Hanoverian Royal Arms. Stained glass includes east window of 1888 by
C.E. Kempe and 2 windows of 1923 and 1936 by A.J. Davies of the Bromsgrove
Guild.
(Buildings of England: Oxfordshire: pp568-70; VCH: Oxfordshire: Vol XI,
pp113-15)