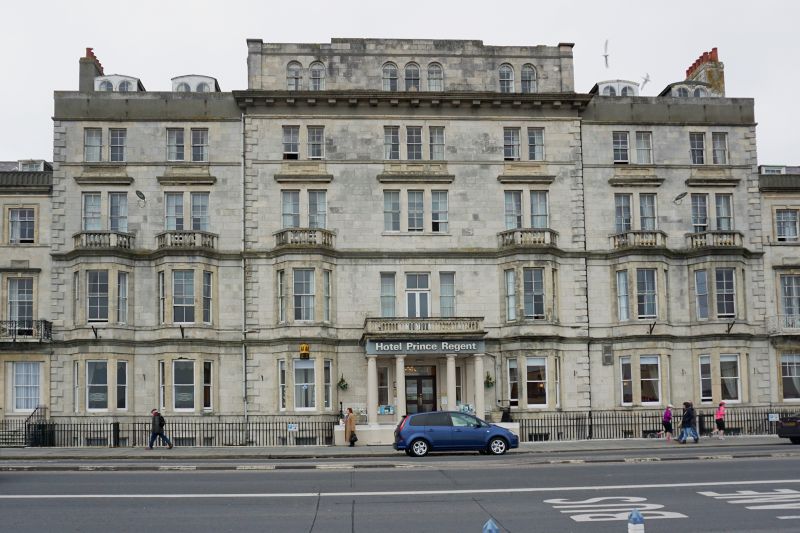 Shown on OS map as Burdon Hotel.
Hotel. 1855-56 (BOE). Portland ashlar front, rendered returns,
and brickwork to the service block in Victoria Street; slate
roofs.
PLAN: the central unit of the terrace, with Nos 1-7 to the
left, and Nos 8-15 to the right (qv).
EXTERIOR: the front block, in 4 storeys, attic and basement is
linked by a single-storey corridor to a full-width service
block and ballroom at the rear, in 2 storeys, but set at the
lower level of Victoria Street which parallels the Esplanade.
The Esplanade front, although built at the same time as the
adjacent wings, is very differently treated, looking forward
to Victorian-style rather than back to the Regency.
2+3+2 windows, the middle section stepped slightly forward,
and with full attic. All windows are sashes, either 4-paned or
plain. At attic level are two 2-light dormers with arched
lights and slightly cambered roofing either side of the raised
ashlar attic with grouped 2+3+2 arched sashes.
Second and third floors have 2 paired sashes in the wings, and
grouped 2+3+2 sashes to the centre, those at second floor
having moulded floating cornices.
The lower 2 floors and the basement have canted bays, to a
balustraded top; at the centre is a triple sash to first
floor, above a bold square portico on paired columns on
pedestals, and pilaster responds on 6 steps, with plain
architrave and balcony balustrade. The central C20 doors are
under a transom light, and are flanked with side sashes.
Spearhead cast-iron railings run full width, returned at the
ends, and stopped to the pedestals of the portico columns.
Cill bands to the ground and third floors, and moulded
cornices, full-width, and carried round the bays above ground
and first floors.
The centre unit has a plain frieze and cornice on heavy
modillions, and the lower wings have cement-rendered
blocking-courses. Rusticated quoins to the ends and the centre

unit. 6 large stacks to the double-ridged roof.
The rear, mainly concealed by the lower building, is rendered,
and has various dormers. Block to rear, with carriage-house,
is in 9 bays; the ground floor, in ashlar with rubble returns,
has a series of segmental arches with flush voussoirs over
wide plank doors, to plain surrounds, but the centre bay is
open, to a through-way to the main building. Above, in brick,
the bays, divided by pilasters, contain a deep 2-light
casement with transom, and with horizontal bars, under
segmental heads, to a sill band with aprons below, and a
keystone carried through as a brick pilaster to the
entablature below the hipped eaves roof.
The inner wall, facing the back of the main range, includes 2
large hipped canted bay windows with sashes having only
horizontal bars; these light the ballroom.
INTERIOR: 2-room depth with continuous central corridor, and
staircase, with inserted lift-shaft, at the rear, left of the
lobby. The entrance lobby has a modillion cornice, and gives
to the central corridor and stairwell through an elliptical
arch on panelled pilasters and with panelled soffit. The
principal ground-floor room to the left has an egg-and-dart
cornice, and an Adamesque fireplace, and to the right is a
heavy stone Victorian fireplace with consoles.
The formerly open-well staircase with quarter landings and
some winders, has Doric newels, stick balusters, and a large
wreathed handrail; a top landing has an arched sash with very
slender glazing bars. A second staircase at the centre front
of the building in the top storeys. Many panelled doors
remain. The ballroom has a suspended late C20 ceiling, but the
original barrel-vaulted ceiling is said to remain above.
The hotel is the emphasised central unit of this early
Victorian terrace which has been very little modified
externally, including the attached rear range. With its stone
frontage it is one of the best presented units on the
sea-front.
(The Buildings of England: Newman J & Pevsner N: Dorset:
London: 1972-: 454).