A Grade I Listed Building in Wilton, Wiltshire 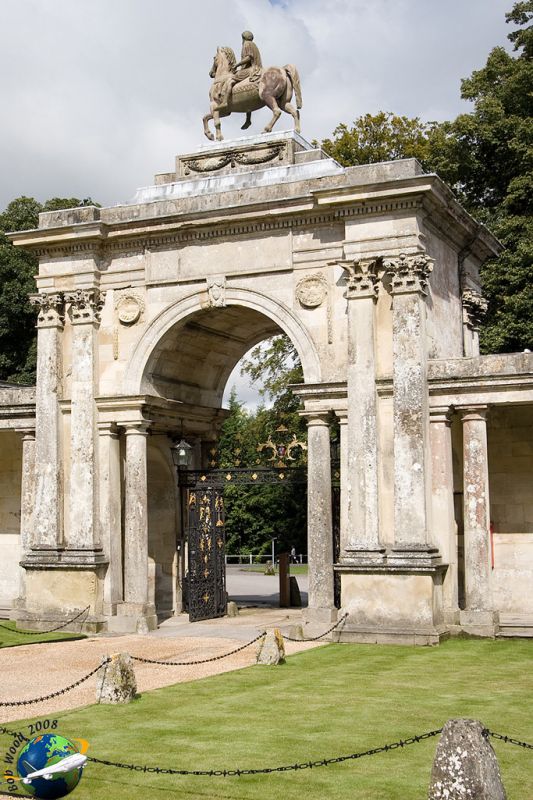 2.
Centrepiece circa 1758-62, an early work by Sir William Chambers. Formerly
an eyecatcher to south of house. Moved here circa 1801 by Wyatt who added
lodges. Entirely built of ashlar. Triumphal arch built to carry equestrian
lead statue of Marcus Aurelius (probably a Restoration work). Detached
pairs of Corinthian columns to sides, dentil cornice and blocking course.
Inside is an archway on free-standing Doric columns, with stone inscription tablet
above and garlanded paterae in spandrels. Mask for key. North side has
Corinthian pilasters instead. Coffered arch. Excellent C18 wrought-iron
gates bought 1855 by Sidney Herbert at Mount Merrion, Dublin.
Linked to single storey wings by short covered passages at impost height
and with outer detached columns, capped by blocking courses. Lodges are
single storey ashlar with one window (glazing bar sash in architrave surround)
to north and south and entered from passage. Side piers with panels. Balustraded
parapets. Hipped roofs. Linked to kitchen courtyard walls by 1 window
extension to left and 2 window extension to right. Muniment Room now in
east lodge.