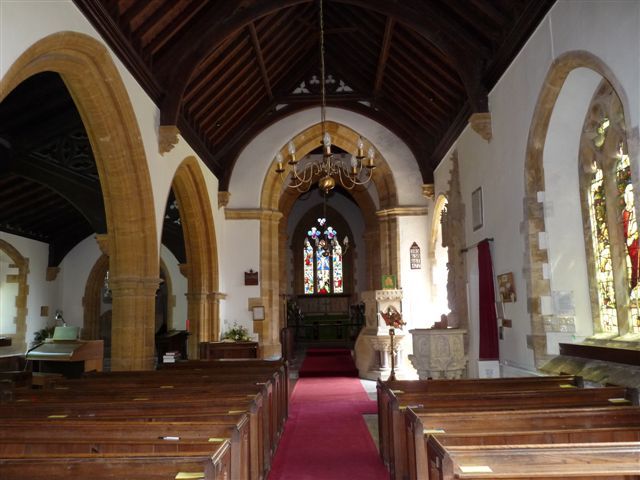 The Speke Chapel has some early C15 work, but the east wall partly rebuilt; plinth, eaves course; angled corner and bay buttresses; windows three-light to east and two-light to the two north bays, all with C15 style tracery set in hollowed recesses: C19 matching vestry projects from west bay, its north gable having a C14 style traceried two-light window with label, and a flat-arched doorway in the east wall. North side aisle a late C19 rebuild of C15 work, with plinth, string course and plain parapet, angled corner and bay buttresses; three-light segmental-arched windows in shallow recesses with almost art-nouveau tracery; the west window a three-light with C15 style tracery and headstone label.

Nave has angled corner and bay buttresses; plinth and eaves course; three-light C19 windows with C14 style tracery and headstop arched labels in south wall; the west window also C19; four-light with Curvilinear tracery with bird-and-leaf stop label, under which is a blocked moulded pointed-arched doorway. South porch C14, but largely rebuilt; plinth; angled corner buttresses, with moulded pointed pointed outer arch, label and over-label scroll lettered 'surely the Lord is in this place', and in gable a small figure of St Andrew in an arched recess, inner door more elaborately moulded, with another St Andrew figure in recess over.

Tower in three stages, with plinth and north-south corner buttresses, string courses, tripled above stage one, and battlemented parapet, with hexagonal plan stair turret to north-east corner slightly higher than remainder of tower: the south face of stage one has a three-light C15 style window with label; stage two has a cusped lancet on north side and a two-light plate tracery window to west, both of these repeated in stage three; south lace has a clock dial stage two, and stage three south and stages two and three east faces have two-light C14/C15 style windows without labels.

In the Speke chapel is a C11 or C12 font, tub pattern with arcaded sides, from the church of West Dowlish, demolished by 1575; between this chapel and the chancel a somewhat restored table tomb with effigies of Joane (nee Keynes) and John Speke, died 1442; in north wall of chapel a marble and stone monument with life-size bust of John Hanninq Speke, the discoverer of the source of the River Nile, died 1864; and in a trefoil cusped recess west of this an effigy of Isabel Wake, died 1359: also a brass to George Speke, died 1528,"builder of this part of the church'.

Remaining fittings C19, but in the south wall of nave a fine C15 canopied statue niche, presumably removed and reset, with a C20 St Andrew statue. A photograph taken before the restoration, in the north chapel, shows that little was left unaltered, except parts of the tower. First recorded rector 1313.