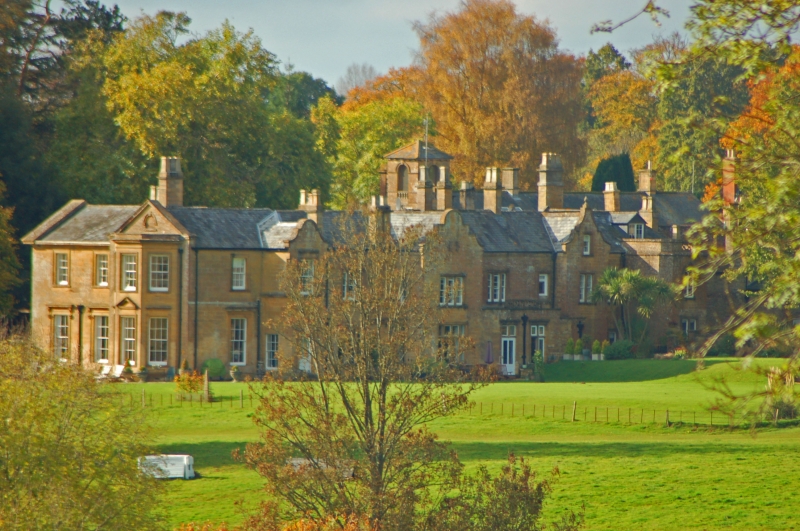 Country House, of early C19. Ham stone ashlar, with Welsh slated roof partly
hidden behind parapets, stone chimney stacks. U-shaped plan of 2-storeys, with
smaller scale 3-storey additions to North West side. Entrance facade faces South
West, and is of 5-bays, the centre bay recessed, with projecting wings to either
side. The central semi- circular arched doorway now blocked flush, and a single
storey porch has been built to bay 5 alongside the projecting wing; plain,
panelled on either side of doorway, simple cornice and parapet block, 6-panel
door in recess: to ground floor bays 1, 2 and 4 semi-circular headed sash
windows of 9-panes with radials, having keystones above and recessed aprons
below: above a band course and then 5 matching windows, the centre being one
pane deeper and having a little stone balustrade across the bottom: a string
course at impost level runs as arching over the window; above again a band
course and open balustered parapet except for bay 3, which has a crude cornice
and parapet block. The projecting wings have blind arched recesses to the sides,
and at ground floor level front are Venetian windows of which the centre light
is blocked in both cases: above these a single l2-pane sash window set in an
architrave, with semi-blocked segmental arch over. The quoins are rusticated
pilaster strips: there is an open pediment to the gable. There are various
stacks - a group of 4 in the North-west corner have been arched together to form
a Quasi turret. There is a stone wall from the North West corner with a sweep,
which then returns South-Westwards to screen the stable area - this section of
wall, about 2.5 metres high, as pilasters and a niche. The South-East garden
front has 3-bays; the 2 left-hand have two 12-pane sash windows at both levels,
set in architraves, the ground floor windows having bracketted hoods; there is
an eaves cornice. The third bay is in the form of an end gable with a 2-storey
angled bay with matching sashes - that to the centre ground floor having a
pediment - the gable is also in the form of a pediment. The North East rear
elevation is more complex, with 3-Dutch gables and transomed windows of C17
character. Adjacent to the main house towards Northern corner a fine flight of
stone steps with open stone balusters with circular motif, with a length of
return path, and trim running North Eastwards 50 metres of good stone retaining
wall with central stone flight of stairs. The interior of the house not
inspected.