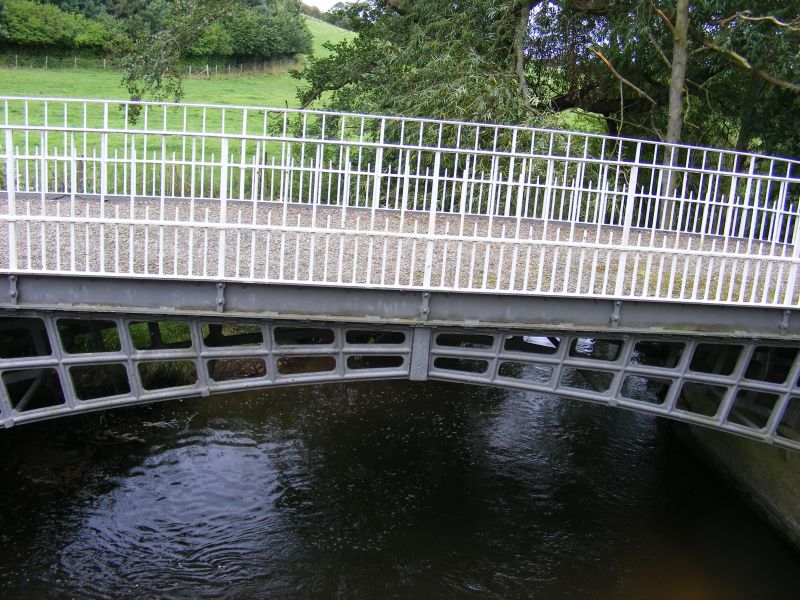 Bridge over the Cound Brook, erected 1813, to a design approved by Thomas Telford.

Bridge over the Cound Brook, erected 1813, to a design approved by Thomas Telford.

DESCRIPTION: the surface of the roadway is formed of cast-iron deck plates, tarmacked and now gravelled over. The deck is carried on five cast-iron transverse members that are supported by four parallel, arched cast-iron ribs braced laterally to each other, and forming a single segmental span of 9.5m. The ribs spring from the stone abutments via a pair of transverse cast-iron plates set in rebates. The battered abutments have moulded string courses and chamfered ashlar quoins, and are topped with cornices. They curve outwards into the river bank to either side, giving the bridge a fan-shaped plan at either end. To the north-west and south-west sides are later stone revetment walls. The delicate cast-iron railings are painted and have a dog rail, dog bars and shaped balusters to the ends. A plaque on the bridge engraved: THOMAS TELFORD ESQR/ ENGINEER/ 1818, is not extant.

This section of the Shrewsbury-Acton Burnell road was turnpiked in 1797, at which time the crossing over the Cound Brook to the north of the hamlet of Cantlop was a narrow bridge. There are references to an agreement to make repairs to a bridge over the Cound in 1713. Sources indicate that money was raised by public subscription in 1812 for the construction of a new carriage bridge. It is not clear whether Thomas Telford, County Surveyor between 1787 and 1834, personally designed the new bridge as he did not list it in his autobiography, but it appears to have been built to a design approved by him. The castings for the bridge were supplied probably by William Hazeldine.

Cantlop Bridge was closed to vehicles in the 1970s when a new road bridge was erected immediately to the west and was taken into the guardianship of the Secretary of State for the Environment (now Culture, Media and Sport) in 1977 and is in the care of English Heritage.

Cantlop Bridge, erected in 1813 to a Telford-approved design is listed at Grade II* for the following principal reasons:

Architectural interest:
* Design: it is an important and early example of a single-span, cast-iron bridge which displays particularly well-executed detailing;
* Survival: it survives in its original form and retains its original ironwork and masonry.

Historic interest:
* Rarity: it is considered to be the only Telford-approved cast-iron bridge remaining in situ in Shropshire;
* Technological interest: it will add to our understanding of the casting and assembly methods employed during this pioneering age and as a surviving testament to the evolution of bridge construction during this period.