A Grade I Listed Building in Hughley, Shropshire 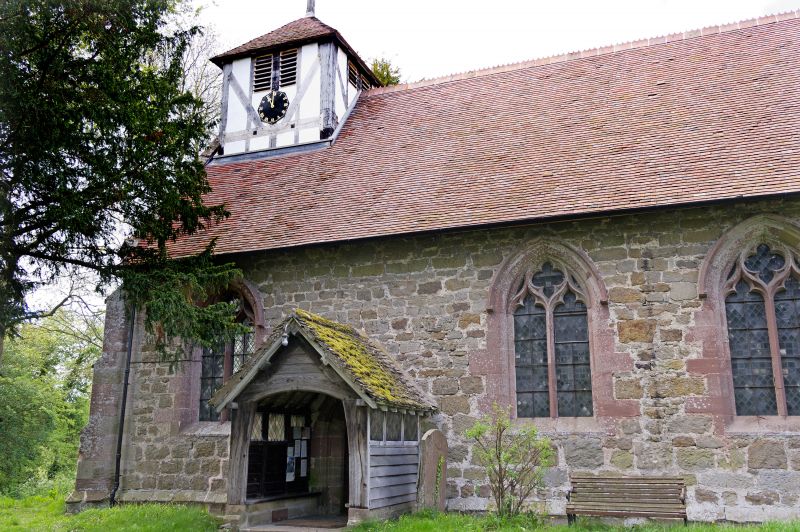 Parochial chapel, now parish church. C13 and c.1360 with early C18
belfry; restored 1871-2 by Richard Norman Shaw. Roughly coursed
limestone and conglomerate rubble, sandstone ashlar dressings; timber
framed belfry with red brick infill, machine tile roof with ornamental
cresting and coped verges. Nave and chancel in one with west belfry;
south porch. Nave: fabric of north wall C13, lancet to each side of
pointed double-chamfered doorway with hoodmould; south doorway in
similar style under late C17 gabled wooden porch (restored c.1871)
with stone slate roof; windows in south wall (c.1360) have 2 cusped
lights with quatrefoils above, one to west and 2 to east of porch;
west window of 3 cusped lights with mouchettes above, restored by
Shaw; timber framed belfry (1701) has close-set vertical posts with
long straight tension braces; louvres and early C19 octagonal clock
on south side. Chancel: in one bay has north and south windows
identical to those in south wall of nave; east window of 3 lights
with curvilinear tracery and cusped quatrefoil to apex; remains of
stone cross to east gable. Interior: mid-C14 trussed rafter roof
with carved bosses extending full length of church restored and
boarded up by Shaw; late C17 carved wooden pulpit and late C19
octagonal stone font; in chancel are a pillar piscina (probably
C15) and on the east wall a statue pedestal resting on the carved
stone head of a woman which retains faint traces of paint;, also a
stone altar slab fixed to wall on left of altar; late C14 stained
glass in north and east windows - fragments of architectural canopies
and figures, south window with stained glass of c.1915; chancel
screen probably early C15, eight broad one-light divisions, 2 to
centre with depressed arch beneath and 3 to either side, richly
carved throughout with upper part of dado delicately pierced with a
variety of late Decorated and Perpendicular tracery patterns, this
is surmounted by a band of unpierced quatrefoils with a row of pierced
quatrefoils and brattishing above; tracery to top of divisions also
in a variety of forms, lierne-vaulted coving with large bosses and to
the top a cornice and cresting with interweaving foliage and figural
decoration; behind the screen, set in the floor, is a stone altar
slab and a good set of late C14 glazed tiles; oak parish chest
(possibly medieval) at west end of nave. No monuments of note.
The church was originally a dependent chapelry of Much Wenlock and
did not become a separate parish until the latter half of C14. The
screen is said to be the finest in the county. B,o.E., Pp. 154-5;
D.H.S. Cranage, The Churches of Shropshire, Part 3 (1897), Pp. 197-9.