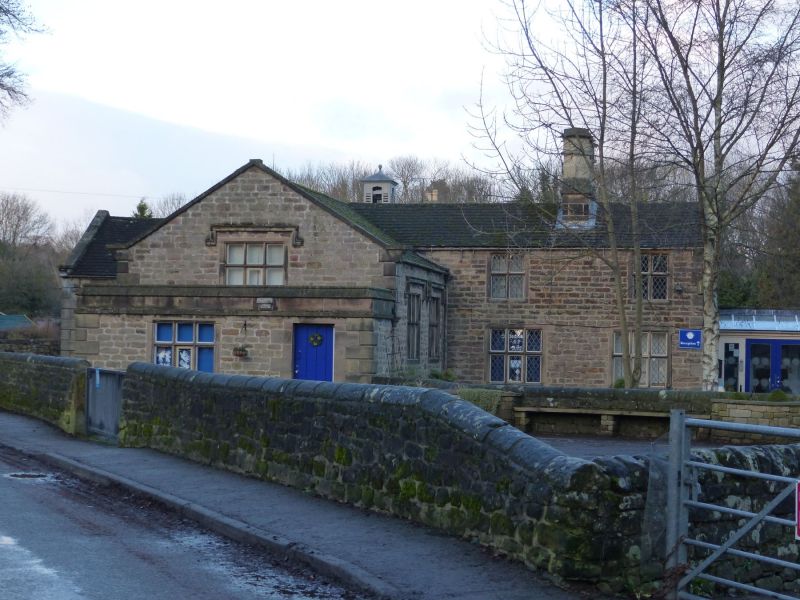 PARISH OF ROWSLEY SCHOOL LANE
SK 26 NE
5/184 (South Side)
Village School, Attached
Wall and Lavatories
GV II
School and Schoolmaster's house, now all part of the school;
attached wall and former lavatory block. 1840. Coursed squared
sandstone and ashlar. Chamfered quoins. Cement tile roof.
Coped gables with moulded kneelers. Ashlar ridge stack with
three diamond plan shafts. Louvred bell-turret on the ridge,
with pyramid roof. Cruciform plan. One and two storeys. North
elevation has a 5-light recessed and chamfered mullioned and
transomed window with returned hoodmould. Projecting gabled bay
has a lean-to on the left with Tudor-arched doorway with
panelled door. 3-light recessed and chamfered mullioned window
with two transoms and returned hoodmould. Sunk panel above with
rounded ends, inscribed 1840. The return elevation has a
3-light recessed and chamfered mullioned window with a transom.
To the right are a similar 5-light and two 3-light windows, all
with returned hoodmoulds. Single storey bay with plain parapet
runs across the west gable end and has a 2-light window to north
and to west and a 3-light with a transom, and a plain quoined
doorway with plank door. Similar 3-light window above. To the
south are two similar 3-light transomed windows. Wing to south
of two storeys, originally the headmaster's house. It has two
similar transomed 3-light windows to the ground floor and a pair
of cross windows above. Additional lean-to bay to south not of
special interest. Wall attached to south east and linked to a
former lavatory block now used for storage. Squared sandstone
and Welsh slate roof, the centre part raised above a louvred
ventilator. Four doorways to west divided by brick piers.
Plank doors with sawtooth tops.