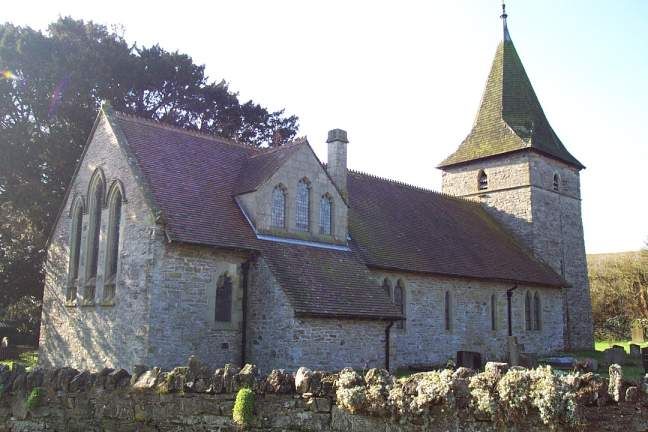 Parish church. Late C13 west tower; nave of 1879-80 and chancel of 1892-3,
both by Henry Curzon. Rubblestone walls, machine tiled roofs and oak shingles
to spire. Nave and chancel in one, west tower with spire, south porch and
organ chamber to north of chancel. Late C13 tower with pronounced batter
and massive walls has narrow rectangular slits with rough shouldered scoinsons
on north, south and west faces, a thin string course at the belfry stage
and weathered trefoil headed apertures above; broached spire with weathercock
added in 1880. Nave of 4 bays with single lancets and paired cusped windows;
continuous chancel of 2 bays has broad cinquefoil headed windows to north
and south, East window of triple lancets under a continuous hoodmould with
sunken quatrefoil panels beneath; a gable (lit by 3 cinquefoil headed windows)
protrudes through the roof slope above the lean-to organ chamber on the north
side. Timber south porch on low stone walls (1880) covers the good south
door, nail studded with 2 strap hinges ending in fleur-de-lys points, which
extend the whole width of the door (?C17); the doorframe itself is probably
C18 with C18 panelling above. Interior. Tower arch probably early C14,
the late C19 panelled roof (the panels themselves are now painted) probably
uses some old timbering (also see the old beam above the chancel screen,
where the roof takes the form of a cellure), arch braced roof to chancel
(1892); the chancel screen itself is late C19 and has a built-in pulpit,
all the other fittings are also late C19, although some earlier wooden panelling
may be re-used. The possibly early C14 octagonal font (one side of which
is ornamented with a rosette inside a circle) retains its original square
stem and raised circular plinth; late C19 stained glass in East window, C17
oak chest and C18 coat of arms in tower. A small brass plate on the north
wall of the nave commemorates Mrs Mary Betton (died 1763). Until 1894 Norbury
was a dependent chapelry of Lydbury North and in 1521 there is a record that
it was dedicated to St Ethelbert. B.O.E. p.219; Cranage Vol.5, Pp.422-3.