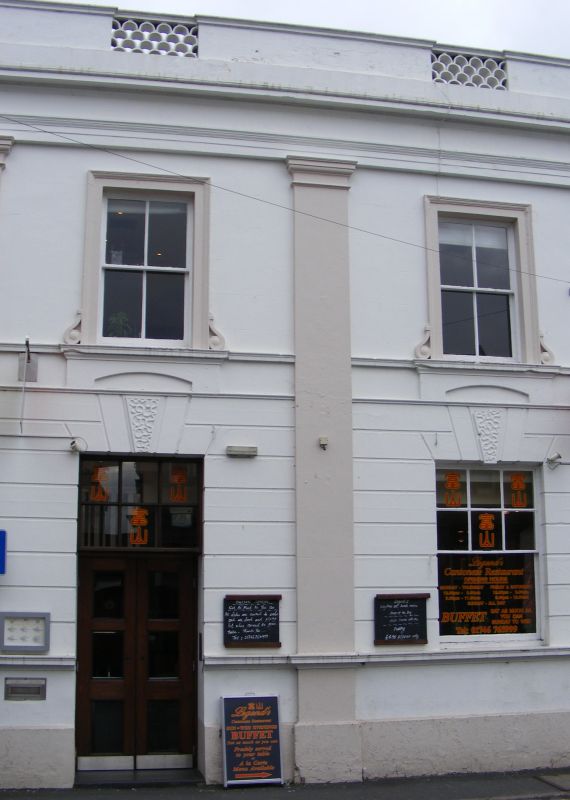 An early-C19 bank with later alterations and adapted use.

MATERIALS: constructed of brick with stucco render to the main elevations. The windows are timber hornless sashes, some without glazing bars.

PLAN: the building is on an irregular corner plot and is of two storeys. The principal elevations face west (Postern Gate) and south (East Castle Street) with the main entrance in the corner between them. There is an additional entrance in the Bank Street elevation and an inserted entrance to Postern Gate.

EXTERIOR: a pared-down Classical design, the three principal elevations are stuccoed with pilasters, a plinth with string course, and rusticated to the ground floor. The main doorway has a moulded architrave with a cornice hood on consoles. The door to the left bay of the Postern Gate elevation is probably a former window with a dropped cill. The Bank Street elevation is of three bays and a recessed central door with a hood on consoles. The openings to the ground floor of each elevation have flat heads with vermiculated keystones and segmental arches set in the storey band above. The first floor openings have moulded architraves with scrolled bases and moulded cill bands. The moulded eaves cornice has a low parapet above that is pierced with ornamental panels.

The former Trustee Savings Bank was built in the early C19. It stands on the route of the former town wall and close to the site of the Postern Gate. It is shown on the Ordnance Survey Map of 1884. In the later C20 it ceased to function as a bank and extensions were built to the rear of the building by this time. In the C21 it has been fitted out as a food outlet to the ground floor.

* as a neatly-designed early-C19 former bank it is a good example of the architectural tradition established for bank buildings of the period;
* it has good Classical detailing including pilasters and keystones to the facades and decorative parapets to the roof.

* with the cast-iron conduit head, separately listed at Grade II, which is set within a niche in the East Castle Street elevation of the former Trustee Savings Bank;
* with the numerous other listed buildings in this part of Bridgnorth town centre, which has a rich historic layout formed around the former medieval town walls.