A Grade I Listed Building in Upton Cressett, Shropshire 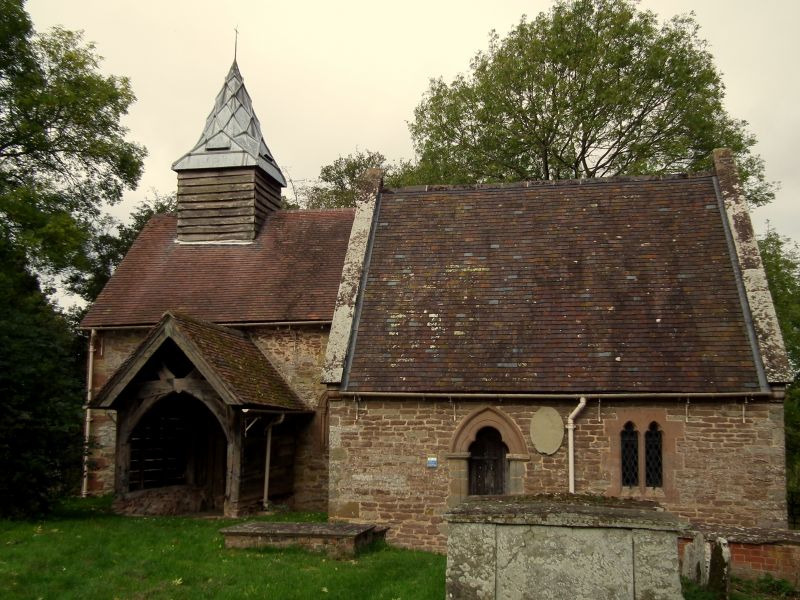 Now-redundant church, dedicated to St Michael, the nave and chancel dating from the C12, with an early-C13 south chapel and C14/C15 timber south porch; restored in 1858.

MATERIALS: the church is built from local sandstone rubble with ashlar dressings, and the roofs are covered in plain clay tile; the bellcote is weatherboarded and surmounted by a spirelet clad in lead. The C19 work can be distinguished from the earlier phases by the use of a pink sandstone for the restoration, which contrasts with the pale buff sandstone of the earlier work.

PLAN: the building is orientated east-west, and has a nave and slightly narrower chancel. A chapel runs parallel to the south wall of the chancel; the south porch is set towards the western end of the south elevation of the nave.

EXTERIOR: the nave and chancel are C12 in date, possibly re-using some Saxon material. The south side of the nave has a Norman doorway flanked by round-arched windows remodelled in Early English style. The doorway has two orders of shafts with a variety of naive foliage designs to the capitals, and two orders of chevrons carved on the round arch, which has an unrelieved tympanum. One of the shafts to the right-hand side has been lost. The wide door is of plank and batten construction, with decorative nail studding. Towards the western end of the roof the bell turret is set on the ridge; its sides are weatherboarded, and the short spirelet is clad in lead worked in a lozenge pattern. The doorway is partly obscured by the C14/C15 timber-framed and gabled porch, which is formed from jowled uprights, tie beams and raking struts, with arch braces meeting a central cusp. The roof has purlins and short windbraces. The south chapel and chancel form a double pile at the eastern end of the building. The early-C13 chapel has a narrow entrance doorway with trefoil head dating from the C19 restoration of the church, with paired trefoil-headed lancets to the right of the same date. The chapel has a steeply-pitched roof with high, coped verges. The east end has a lancet of the C19, with a quatrefoil window above. The east end of the chancel has a Norman window remodelled as a lancet in the C13. The north side of the chancel has a single round-arched lancet. The north side of the nave shows clearly the arches of the two-bay arcade of the since-demolished C13 north aisle. A window of paired lancets is set within each archway. The west end has a single round-arched lancet window of the C12. This window and several of the others have diamond-leaded panes; another has rectangular panes with coloured margin glazing.

INTERIOR: the interior space is dominated by the Norman chancel arch, which has three orders of shafts with foliate and geometric carving to the capitals, and three orders of chevron carving to the arch. A pointed-arched recess to the right may mark the site of a stair to a former rood loft, or might be associated with an earlier pulpit. The windows are deeply splayed. The west end of the nave has three massive jowled posts with arch-bracing supporting the bell-frame, which houses two bells, one of circa 1300, the other of 1701 by Abraham Rudhall of Gloucester. The place of the fourth post is taken by the blocked arcade to the north wall, from the demolished C13 north aisle. The arcade is expressed internally by the central, circular pier with a shallow, circular capital and double-chamfered arches with polygonal responds, and some foliate carving to the capitals. The main roof truss to the nave has tie beam, principal rafters, collar and a central post rising from the tie beam to the collar, with raking struts to either side; the remainder of the nave roof is of collar-rafter construction with ashlar pieces, and cusped, curved windbraces. The floors are covered in terracotta tile, some with slip decoration. The chancel has a raised dais and wrought-iron and timber altar-rail of C19 date. There is a plain square aumbry in the south wall. The roof of the chancel is of simple A-frame construction apparently dating from the C19 restoration. High in the south wall the remnants of a former window are evident. The remainder of the south wall of the chancel has been largely removed in the creation of a wide arched opening with a very shallow arch, almost four-centred, with beaded moulding to the edges, giving access into the early-C13 south (Cressett) chapel. The chapel has terracotta-tiled floor, and a hammer-beam roof of slender scantling dating from the C19.

WALL PAINTING: the Cressett chapel has a painting on its west wall dating from circa 1200. The subjects include an angel, an enthroned king, and a broad band of foliate scrollwork in reddish-brown tones. The style of the scrollwork is identical to that in the wall paintings at nearby Claverley, and it is to be supposed that they are by the same hand.

FURNISHINGS: the font is Norman, and tub-shaped. There is cable moulding to the top rim and to the base, and the exterior is carved with tall, round-arched arcading. The pulpit, which has timber panels on a polygonal stone base, dates from the C17 and has carved arcading and foliate motifs in carved lozenges.

The Church of St Michael dates from the C12, though it may be on the site of an earlier, Saxon church as there are indications that some of the fabric may be re-used from this period. The church is first mentioned in sources in 1291, but stylistically must date from the C12. The settlement of Upton Cressett dates back to the Saxon period, and the church, together with the adjacent Upton Cressett Hall (C14 and later), was once part of a medieval settlement which survives as earthworks in fields to the south-east. The settlement was known as Ultone in the Domesday Book; a name which comes from the Anglo-Saxon word 'Upton' meaning 'higher settlement'. In 1165, Upton formed part of the Barony of Fitz Alan, being held for some generations by the descendants of Alan de Upton. The Cressetts first appear as Lords of Upton towards the close of the C14, when the family succeeded to Upton and gave their name to the place. The present Upton Cressett Hall dates from this period and later, and was constructed on a medieval moated site set above the church, which must have been the site of the earlier manor house. The life of the medieval settlement is largely undocumented and although its date of desertion is unknown this may have come shortly before, or have been a consequence of, emparkment. Upton Cressett Park is first mentioned in 1517 in Wolsey's Inquisition of Enclosures when it was alleged that Thomas Cressett had emparked 40 acres of arable land; it is possible that the village was abandoned when the deer park was created. The nave and chancel date from the C12, and in the early C13, a chapel was added to the south of the chancel. Although this chapel has long been known as the Cressett Chapel, it clearly pre-dates the tenure of the Cressett family, and thus must originally have been built for the de Upton family. It is unusual for a chapel of this size to be attached to the chancel at this early date, but this is likely to be explained by the importance of the family at the Hall. In the same period, a north aisle was added to the nave, though it was subsequently demolished. Some alterations to the chapel were made in the post-medieval period: a watercolour painting of the church by the Reverend E Williams dated August 1789 shows that the doorway and window openings were all square-headed at this date, the windows glazed with small panes. The building underwent Victorian 'restoration' in 1858, with repairs made in pink sandstone, and alterations to some of the windows, most obviously those in the chapel, as well as the replacement of its roof.

Along with Upton Cressett Hall and Gatehouse, the church became largely disused in the C20, and suffered from neglect and decay; it was closed in 1959 due to its dangerous condition, and formally declared redundant in 1970, the same year in which it was listed at Grade II. A wall painting in the Cressett chapel was rediscovered in 1968. The church was vested in the Redundant Churches Fund (now The Churches Conservation Trust) in 1972, and much repair work was undertaken at this date.

The former Church of St Michael at Upton Cressett is designated at Grade I, for the following principal reasons:
* Relative date: the church is predominantly Norman in date, with a C13 family chapel to the south, and a C14 or C15 timber porch;
* Architectural interest: the Norman work is of high quality and shows a good degree of artistic interest in the extensive geometric carving of the south doorway and the chancel arch, and the retention internally of the former north aisle arcade;
* Fixtures and decoration: it retains a Norman font and has C13 figurative wall paintings in the south chapel;
* Lack of later alteration: a restoration in the C19 demonstrated a light touch and has not damaged the fabric or the quality of the early medieval phases;
* Group value: for its intimate relationship with the adjacent Upton Cresset Hall and in its proximity to the Hall and its Gatehouse, also listed at Grade I.