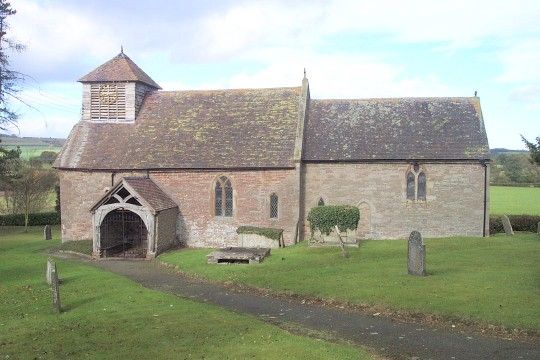 EXTERIOR: The church is mainly in simple Decorated style. The nave south wall has cusped pointed windows to the right and left ends (of which the right-hand window is lower and lit a side altar), and a 2-light window with Y-tracery to the right of the porch. The south doorway is tall and pointed with a single chamfer and moulded capitals. The door survives with its original ironwork, comprising strap hinges bisected by large C-scrolls, and an enriched horizontal bar, of the late C12 or early C13. The porch side walls are C19 stone, but the front of jointed crucks survives of the original timber-framed structure. The west front has a single pointed window above a shallow buttress. The north side has two 2-light windows, inserted in 1869. The 2-light Decorated east window of the chancel is of the same date. In the chancel south wall is a blocked priest's door with a single order of chamfer, with a low cusped pointed window to its left and 2-light Decorated window to its right. On the north side of the chancel is a single pointed window and the vestry, which is under an outshut roof. It has a pointed east doorway with boarded door, and 2 small trefoil windows in the north wall. The large, square timber-framed belfry is weatherboarded under a pyramidal roof with finial, and has louvres and round clock faces of 1927 to the north and south sides.

INTERIOR: The nave has a late medieval 4-bay arched-brace roof with a single tier of windbraces. In the south-east of the nave is a cusped piscina of late C13 or early C14. The Decorated chancel arch has round responds, foliage capitals and double-chamfered arch. The chancel has a late-medieval 3-bay arched-brace roof incorporating a single tier of windbraces, the only ornamentation of which is central rosette bosses. In the chancel south wall is a tomb recess of c1300, with segmental pointed arch and hood mould. The plain segmental arch of a former piscina survives in the south wall, and a cusped aumbry is in the north wall. The C19 stone reredos has sculptures of Christ and SS Peter and Paul framed by cusped arches with gabled hoods, flanked by octagonal piers surmounted by sculpted angels, and then by 2 floor-length blind arches. The interior walls are stripped of plaster. The plain floor tiles in the nave were installed in 1954. The chancel has red and black tiles, and decorative and encaustic tiles in the sanctuary of 1888. Three grave slabs have also been laid into the chancel floor, two dated 1705 and 1720 respectively. The porch also has C19 floor tiles.

PRINCIPAL FIXTURES: The font has a round bowl of tooled freestone, on an octagonal base, described as new in 1862. The wooden C19 polygonal pulpit has Gothic arcading. Pews and choir stalls have simple shaped ends. The communion rails of 1888 are wooden, with bracketed uprights incorporating pierced quatrefoils. There are few memorials. Above the south door is a simple engraved tablet commemorating Richard Hotchkis (d 1693). On the north wall of the chancel is a marble war-memorial tablet to the 1914-18 and 1939-45 wars. Chancel windows have stained glass. The east window shows the crucifixion and the Sermon on the Mount, of 1869 by Done & Davies of Shrewsbury. Other windows are by John Davies: in the south window is the baptism of Christ and Christ carrying the cross, of 1879, and the north window shows St Paul, after 1893.

HISTORY: A parish church was established at Stanton Long by c1200, and comprised nave and chancel only. Alterations later in the C13 and beginning of the C14 included new windows in the nave, partly to light a new side chapel, and rebuilding the south chancel wall, which incorporates a piscina and tomb recess of c1300. The roofs are late medieval. The belfry and the south porch were probably added in the C16 or C17. The bell turret is mentioned in 1736 and in 1862 the porch was described as built of wood and plaster. The church was restored in 1842, but the present Decorated character of the building derives mainly from restoration in 1869-71 by S Pountney Smith, architect of Shrewsbury. He rebuilt the side walls of the porch, the chancel east wall and the nave north wall, and inserted the chancel arch and the present windows. The north vestry was added in 1871. The sanctuary was enriched in 1888, chiefly by a reredos designed by F.R. Kempson, with figures sculpted by Robert Clarke of Hereford.

REASONS FOR DESIGNATION:
The church of St Michael and All Angels, Stanton Long, is listed Grade II* for the following principal reasons:
* The significant extent of surviving medieval fabric.
* The church retains medieval architectural detail of special interest, especially the fine roofs and the south door with its rare-surviving early C13 ironwork.
* Post-Reformation detail includes the timber-framed belfry, characteristic of the region.