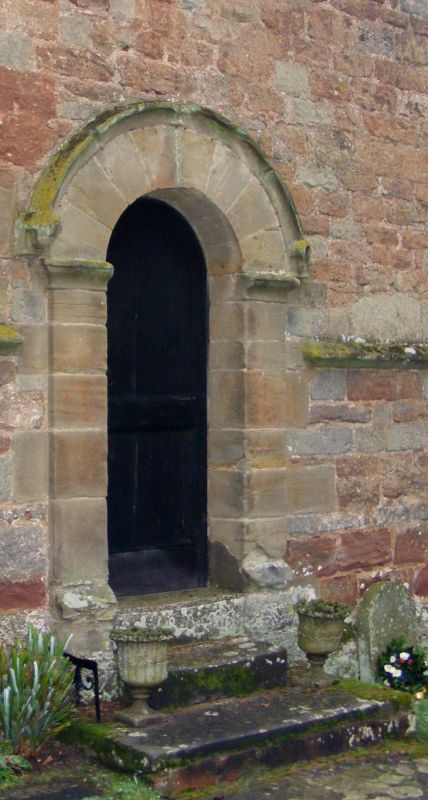 EXTERIOR: The exterior, despite being of the C17 and C19, is in the Decorated style of the early C14. Windows and doorways have hood moulds with head or foliage stops. Roofs are behind coped gables on moulded kneelers. The chancel is an important Gothic-survival work, with a bordered stone over the east window inscribed 'AN:DO 1633'. It has a continuous sill band and an impost band in the east wall. There are large stepped buttresses at the junction of nave and chancel, and diagonal east buttresses. The chancel south and north walls have a single 2-light Y-tracery window. On the south side there is also a round-headed priests' doorway, with plain moulded imposts and weathered head stops. The studded door is probably also of 1633. The 3-light east window has intersecting tracery. The ashlar nave south wall has a 2-light window to the right of the porch and 3-light windows at the outer ends, all under segmental heads. The west wall has diagonal buttresses and a bell turret of 1858 which is supported from ground level by an arched buttress that frames the small west window, which incorporates a pointed trefoil tracery light. The bell turret is in 2 stages. The lower has 2 bells in cusped openings with linked hood mould; the narrower upper stage is square with a single bell in a cusped opening, surmounted by a broach spirelet with weathervane. The north side of the nave is different to the south, of 3 buttressed bays. The outer bays have small round-headed Norman windows, and the central bay is blank (the former doorway is only visible inside). The south porch has diagonal buttresses and pointed entrance, which has a continuous moulding carried over the buttresses to the side walls, where it is a sill band to small ogee-headed windows. In the gable is a blind quatrefoil. Inside the porch are benches and pointed boarded door with strap hinges.

INTERIOR: The interior is unusually broad and, because nave and chancel are of equal width, there is no chancel arch. Walls are plastered and painted, except for the west wall, which is ashlar below the turret. A sill band is on the nave north wall, where there is a round-headed blocked Norman doorway. The chancel retains its 2-bay hammer-beam roof of 1633, incorporating primitive terms beneath the hammer beams. The roof rests on big stone corbels, carved with mythical figures including a unicorn, Pegasus, eagle and lion. The panelled dado in the east wall, continued above the choir stalls on the north and south sides, is also probably of 1633. The chancel has a C19 tiled floor, with richer decorative tiles, including encaustic tiles, in the sanctuary. The nave has a 3-bay hammer-beam roof on moulded corbels, with 2 tiers of wind braces. It has a panelled dado that is earlier than the present pews. At the west end is a boarded and half-glazed partition for the added vestry.

PRINCIPAL FIXTURES: The plain tub-shaped lead-lined font on a broad pedestal with roll moulding and square base is late Norman. The Jacobean style pulpit is probably of 1633 like the chancel. It is octagonal on a round stone base, and has 2 tiers of arches enriched with foliage. Plain stone steps have a wooden handrail and balusters. The wooden communion rails have turned balusters with cusped arches supporting the rail. C19 pews have simple square-headed panelled ends. The choir stalls are richer, with shaped ends and panelled fronts. A benefaction board on the west wall of the nave is dated 1815. A painted Victorian Royal arms is above the west window. There are several wall tablets. On the south wall of the chancel is a memorial to Francis Billingsley, killed defending Astley Abbots in the Civil War, in the form of a rectangular tablet with inset slate inscription panel and painted armorial badges around it. In the north wall are 2 tablets to the Jones family of Stanley Hall, both of white marble on grey backgrounds, erected in 1829 and 1832. Also in the north wall is a plain tablet to Captain Hugh Tyrwhitt (d 1907). A simpler but more stylish tablet to Major Stephen Thompson (d 1955) has red lettering. In the nave north wall is a marble 1914-18 war memorial tablet. Only 2 windows have stained glass. In the east window is a re-set medieval figure of c1300. The C19 west window shows Christ as Salvator Mundi. On the north side of the nave is a rare surviving maiden's garland, dated 1707, made up of wooden hoops with ribbons and two pairs of gloves.

HISTORY: The church is first mentioned in 1138 as a chapel of Morville, and remained a simple nave and chancel throughout the Middle Ages. The chancel was rebuilt in 1633 (date in east gable), and retains dado and pulpit of that time. In 1856 J. T. Wing, brother of the incumbent, began restoring the church by rebuilding the south wall, and then added the porch and a west turret with spirelet in 1858. Further restoration was by A.W. Blomfield in 1859.

REASONS FOR DESIGNATION:
The church of St Callixtus, Astley Abbots, is listed Grade II* for the following principal reasons:
* An outstanding dated and well-preserved example of C17 Gothic survival.
* Fixtures of special interest including pulpit, chancel dado and medieval glass.