A Grade II* Listed Building in Acton Round, Shropshire 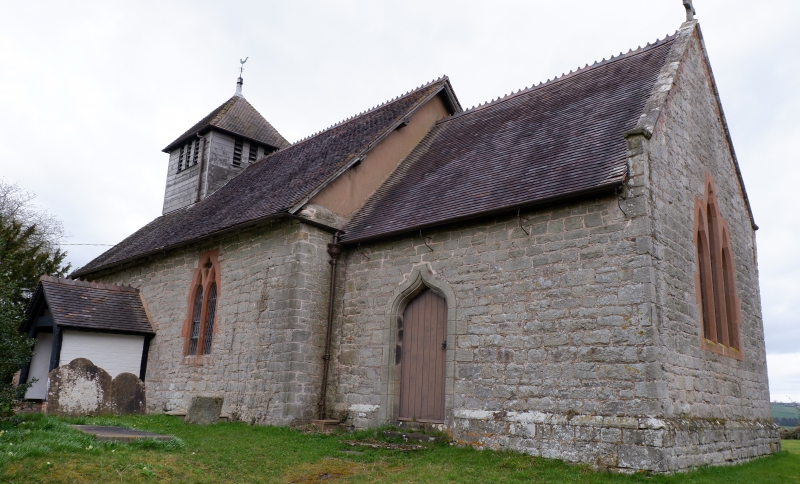 Church of England Parish: Acton Round

II*
DATES OF MAIN PHASES, NAME OF ARCHITECT
A parish church of late C12 origin, but the chancel was rebuilt in 1761 and a north chapel added 1763, with monument by T.F. Pritchard. Restored in 1895.

MATERIALS: Mainly of coursed local grey siltstone, except for the porch of hand-moulded brick, and clay tile roof with ridge tiles.

EXTERIOR: The nave, of 2 wide bays, has 2-light Decorated windows to the north and south walls inserted in 1895. The south porch has a cruck truss to the entrance and inside it the south doorway has an C18 triangular head. The door, which has strap hinges enriched by horseshoe scrolls of the late C12, has scratched dates of 1738 and 1739. In the west wall is a square-headed 2-light C16 window with cusped lights. The square weatherboarded belfry, typical of the area, has a pyramidal roof and apex weathervane. It has 3 narrow sound holes with louvres in each face. The chancel has a wider plinth. The east window, of 1895, is 3 stepped and cusped lights in red sandstone dressings. In the south wall an ogee-headed doorway has a sunk roll mould, and boarded door. The north chapel has a wider plinth like the chancel, and moulded stone cornice, with roof hipped to the north end. It has pointed windows in the east and west walls, with plain bold surround, similar to the chancel door, and small-pane glazing with intersecting lead cames.

INTERIOR: Interior walls are plastered, except for the encaustic-tile panelling around the sanctuary. The nave has plaster barrel ceiling of the C18. The chancel has a 3-bay arched-brace roof, boarded behind. The chancel arch is 1895, of red sandstone. It is pointed, with a single order of chamfer, on semi-circular responds with scalloped capitals and impost bands. A pointed arch, with continuous chamfer, leads into the north chapel, which has a flat plaster ceiling on an arcaded frieze. The nave floor is C19 black and red tiles, with raised wood floors to the pews and choir stalls, and raised stone-paved floor to the west end. The chapel has a similar stone floor.

PRINCIPAL FIXTURES: The north chapel was built to display the monument to Sir Whitmore Acton (d 1731), which fills the north wall. Inspired by the pattern books of Batty Langley, it is one of the earliest monuments to mix rococo and Gothic elements. A sarcophagus and inscription panel, with rococo garlands, are framed by a cusped arch, and flanked by pairs of Corinthian columns, which are unfluted and have shaft rings. The entablature has a Gothic lozenge frieze enriched with foliage. Above the cornice are a Rococo crest and flaming lamps. In the chancel north wall is a Baroque monument to Richard Acton (d 1703) and his wife by Edward Stanton. Two demi figures in high relief hold hands in an oval frame. In the nave north wall is a simpler neo-classical tablet to Sir Richard Acton (d 1791). The octagonal tub font is lead lined, and therefore probably medieval, but has been re-tooled and stands on a moulded base. The pulpit is C18, polygonal with panelled front. The main pews and choir stalls have plain ends with triangular heads and round finials. At the west end of the nave are pews with shaped ends. Over the south door is a tympanum of oak made in 2000 by Andrew Pearson, which depicts the Annunciation in a modern rural setting.

HISTORY: A church of probable later C12 origin, but the character of the present building is defined by addition and rebuilding of 1761-3 and 1895. The chancel is said to have been rebuilt in 1714 but an inscription on the base of Sir Whitmore Acton's monument gives the date 1761. The chancel doorway is mid C18 and, with the plinth, matches the work on the north chapel, which was added in 1763 by Sir Richard Acton to house a monument to his father (the dates are on the base of the monument). The monument is by Thomas Farnolls Pritchard, architect of Shrewsbury, who may also have designed chapel and chancel. Ebenezer Pritchard oversaw reseating and repairs in 1852-53. Restoration in 1895 introduced new windows in nave and chancel, and a neo-Norman chancel arch, all using red sandstone that was typical of the period.

REASONS FOR DESIGNATION:
The church of St Mary, Acton Round, is listed Grade II* for the following principal reasons:
* It has a well-preserved C18 chapel and chancel.
* It has important and high-quality C18 wall monuments.
* It has other architectural details of interest, including C12 ironwork and C18 pulpit.