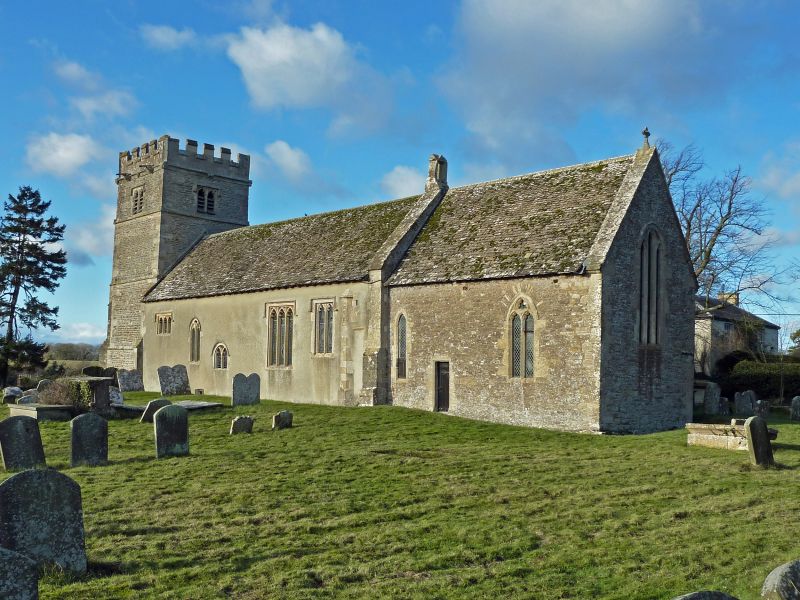 Perpendicular tower of three storeys with plain string courses, two-light cusped bell openings under flat heads with dripstones, a moulded string to upper storey with gargoyles and an embattled parapet. West window of three cusped lights under a pointed head. South wall of nave has one flat-headed window of three cusped lights, a two-cusped-light window under a pointed head, a similar but smaller two-light window of C19 date and a large flat-headed window of three cusped lights next to another of two lights. Apart from the C19 window these are C14 and C15. The north wall of the nave preserves two Early English lancets. The chancel south wall rebuilt circa 1290 but preserves an Early English lancet and a plainly moulded priest's door alongside a Decorated two-cusped-light window under a pointed head. The chancel north wall has two Early English lancets. East window of three stepped pointed-trefoiled lights under a pointed arch of the late C13. On the west end of the nave is a decayed C13 sanctus bellcote. Gabled, stone tiled, timber-faced porch leads to the north doorway with a plain pointed arch and hoodmould and an early C15 door with large scale tracery with feathered cusping.

Inside, a plainly moulded C15 arch to the tower, deep splays to the windows and a mid C13 chancel arch on half shafts. The chancel has a cusped-headed piscina on the south wall, a trefoil-headed niche behind the altar flanked by two lancet niches and below these, rectangular niches. Open trussed-rafter roofs with semi-circular bracing, both restored C19. Circa 1500 brass to William Morys in nave. 18-inch figure, with three small figures below. He is recorded to have been 'sumtyme fermor of Cokysell'. There are also several late C18 mural tablets. In the east window clear glass panes with engraved shields of 1792 by Eginton. Late C17 communion rail with flat balusters of dumb-bell outline and a Jacobean pulpit with strapwork in the nave behind which are rood stairs.