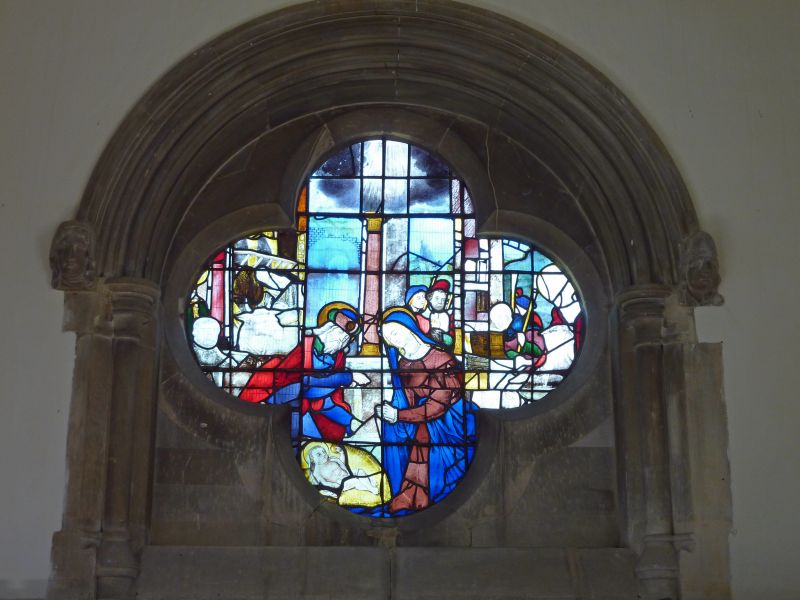 COLESHILL
Church of All Saints

INTERIOR: a tall, plainly moulded arch to west tower under which a vault was planned,- the springers survive but the ringing stage has a timbered floor. The nave has a south arcade of Transitional columns and flat leaved capitals with later double chamfered arches and a north arcade of late C13 character with round abaci and double chamfered arches. C19 gallery above south porch. Double chamfered chancel arch on dying imposts. 1788 east window set within C19 Early English shafts and capitals. Perpendicular roofs throughout with braced tie beams on plain stone corbels supporting rafters. Stained glass in east window inserted in 1788 depicting the Nativity, brought from Angers. Good early C20 stained glass in south transept window.

Fine monument on the south wall of the chancel to Sir Henry Pratt, died 1647 and his wife. White and black marble. Two effigies, she recumbent and below, he semi-reclining, a little above. Repaired in 1831. Also on the south wall of the chancel, a pyramidal marble monument with cherubs and an oval portrait medallion to Viscountess Folkestone who died in 1751 by Michael Rysbrack. On north wall of chancel an alternated Gothic canopy by Coade and Seely of 1812 to Mark Stuart Pleydell. C18 box pews survive in the south transept.