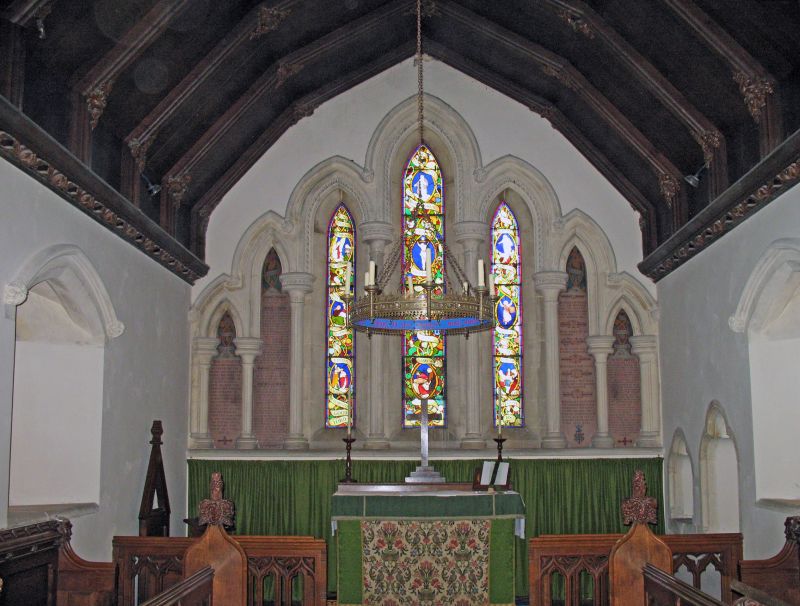 Church of England Parish: Over with Nether Worton

WORTON OVER WORTON
SP42NW
6/247 Church of the Holy Trinity

Church. Rebuilt 1844 incorporating some medieval work by J. Derrick for Revd.
William Wilson.Marlstone ashlar with some limestone dressings; Westmorland-slate
roofs. Chancel, 3-bay nave and south aisle, south porch and north tower. C19
chancel in C13 style has 3 grouped lancets to east, and a single lancet to north
and south, all with hood moulds and carved stops. Walling and parapets of south
aisle and nave may be medieval but windows are restored: 2-light reticulated at
east end of aisle; 2-light geometrical to east and west of porch; a large
3-light window with intersecting tracery at the west end of the nave where the
former tower stood. The parapets have some medieval gargoyles at the angles. The
south porch has a large shield-shaped sundial and a foliated gable cross. North
side of nave has a large C19 window of 3 lights with flowing tracery. Massive
3-stage tower of 1849, in a mixed romanesque and C14 style, has tall traceried
openings to the bell chamber. Interior: chancel east window is set within 7
graduated lancets with detached shafts and dog-tooth ornament, the outer lancets
containing the Decalogue etc. 6-canted chancel roof has moulded ribs with carved
foliage bosses and a carved frieze. Trefoil-headed piscina and sedilia may be
C13. Oak chancel fittings have traceried panels and carved poppy heads. C19
encaustic-tile floor. Chancel arch has 2 chamfered orders with contrasting
voussoirs and springs from moulded corbels. C19 nave arcade in C13 style has
carved head stops. Nave roof trusses have traceried spandrels above braced
cambered tie beams. Octagonal C19 font has carved roundels of foliage. Stained
glass in chancel by Clutterbruck (1845); at west end of nave by Camm Bros.
(c.l878). Elaborate organ case with reticulated tracery. C17 full-length effigy
in legal robes retains much colouring and may be Edmund Meese (died 1617) whose
memorial tablet is set in the west wall. J.H. Newman, later Cardinal, preached
his first sermon in the church.
(V.C.H.: Oxfordshire, Vol.XI, p.300; Buildings of England: Oxfordshire, p.750).