A Grade I Listed Building in Henley-on-Thames, Oxfordshire 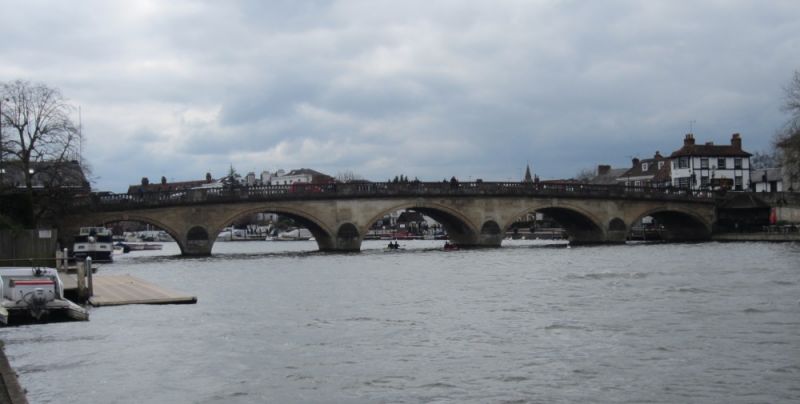 1/32
The following should be added to the description:

The S. retaining wall of the E. abutment is built in part on the intact easternmost
span of the original C12 bridge. This has a segmental vault of shuttered flint
rubble masonry with Barnack stone dressings. The arch on the S. is of two square
orders; that on the North is probably similar but is partially obscured by a C18
blocking wall. This bridge was probably built by Henry II in the 1170s; in 1179 it
was recorded that he 'had bought land in Henley for making buildings' (K A Rodwell
(ed), Historic Towns in Oxfordshire (1974), 125). Also included in the statutory
list for the Parish of Remenham in the Wokingham District Council SU 78 SE 1/6.

2.
1786. Designed by William Hayward who died in 1782, before work started.
Keystones of Thamesis and Isis carved by sculptress Mrs Damer, daughter
of General Conway of Park Place and cousin of Horace Walpole. Stone,
5 arches with rusticated treatment to base of interval piers. Dentil
cornice below balustrade which bears metal lamposts. Fluted plinths with
4 cherubs heads. 4 sided lamps. Metal plaque at each end of bridge instructing
drivers of "engines".

No 52 and the Angel Hotel form a group with St Marys Church, The Red Lion
Hotel and Stables and No 18 Thameside with Henley Bridge at this entrance
into the town.