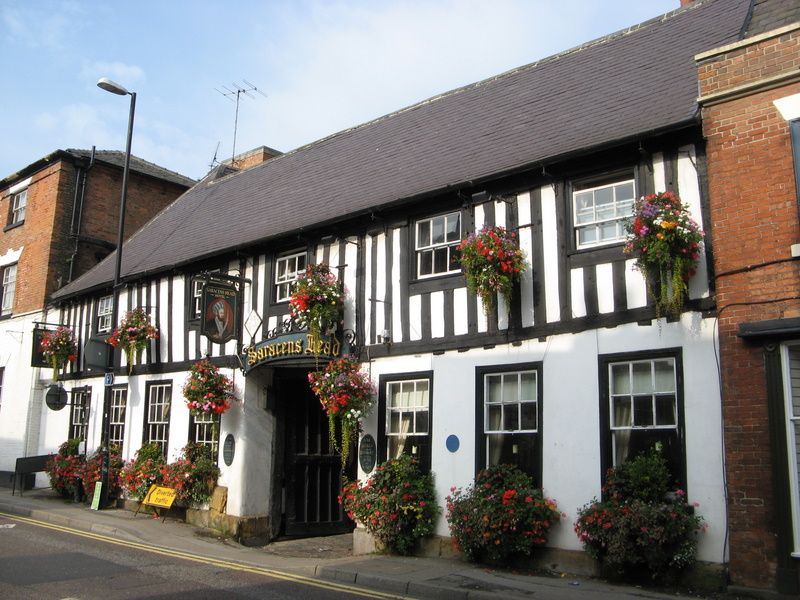 Hotel, incorporating former Assembly Room. Dated by
dendrochronology c1460, with early and late C19 and C20
alterations and additions. Former Assembly Room 1805, by
Richard Ingleman. Close studded timber framing with rendered
nogging, colourwashed brick underbuild, stone plinth to east
front, and hipped and gabled slate and pantile roofs. 4 ridge
and single side wall stacks. 2 storeys. U-plan with long rear
wings facing a yard. East front, facing the Market Place, has
a range of 5 small glazing bar sashes. Below, an off-centre
carriage opening with a pair of plank doors, flanked to left
by 4 larger glazing bar sashes. To right, 3 similar sashes,
their lower lights reglazed. Close studded walls under the
archway have arch braces. Door in wall to left. South side of
yard has to left a 2-storey late C18 brick wing with double
hipped roof and dentilled eaves. 3 glazing bar sashes and
below, a late C19 canted wooden oriel window and to its right
a casement, both with leaded glazing. To right a set back
2-bay 2-storey range with close studding and brick nogging and
underbuild. In the right gable arch braces to the tie beam.
C19 and C20 leaded casements, and half-glazed door to right.
In the return angle, a late C20 flat roofed single bay
addition. To right again, a further set back 2-storey range
with all C20 fenestration and a single bay of close studding
above to the left. To the right, a 3-bay late C20 addition.
North side of yard has to right a 2-storey 6-bay range of
close studding with brick underbuild and nogging. Irregular
fenestration with mainly late C19 casements and an off-centre
loading door. Below, to right, a glazing bar sash flanked by
single doors, that to left with a round head. To left, 2
garage doors. To left again, a late C18 continuation of the
wing in colourwashed brick with a large garage opening to the
right without doors. Interior has on the first floor, to the
right of the carriage arch, a room whose north wall has late
C16 wall paintings, recently restored. At the north east end
of the front range a 2-bay crown post roof, and in the north
range a similar roof with 6 pairs of jowled posts, arch braces
and close-studded gables. The remainder of the front range and
the south range have principal rafter roofs. Front range
ground floor has remains of timber framing, much of it
restored and re-used, and a late C19 dogleg staircase with
turned balusters, in an early C17 style. The former Assembly
Rooms survives only as a facade. Brick, the ground floor
colourwashed, with stone dressings and hipped slate roof.
Plinth, moulded first floor sill band, coved brick eaves. 3
storeys; 4-window range of glazing bar sashes with
multi-keystoned lintels. Above, 4 smaller sashes with plain
lintels. Central shallow Doric portico with projecting blind
centre flanked by single glazing bar sashes. Beyond, on either
side, single glazing bar sashes with multi-keystoned lintels.
This building was the lodging of Charles I before his
surrender to the Scots in May 1646.
(Norman Summers: A Prospect of Southwell: London: 1974-: 14;
dendro sample record & summary: Nottingham University tree
ring dating laboratory: initial report: 1988-; G. Beaumont,
Notts. County Council Conservation Officer: 1988-; Buildings
of England: E Williamson: Nottinghamshire: Harmondsworth:
1979-: 333).