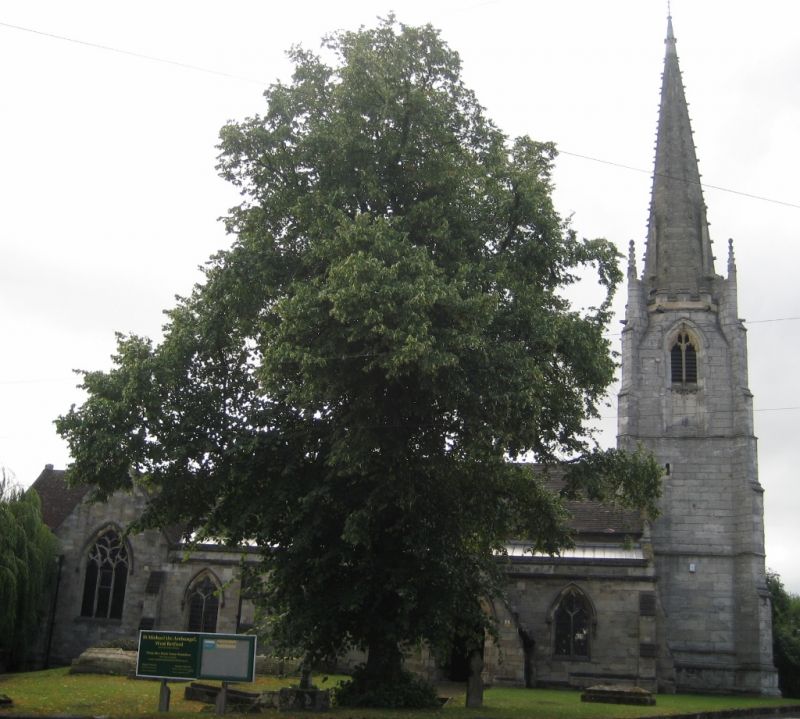 PLAN: west tower, five-bay nave with two lean-to aisles. North and south porches, transeptal organ chamber (north). Two bay chancel, with church hall (not of interest) of 1978 adjoining to the south, but not accessible from the church.

EXTERIOR: the fine slim spire seems early Perpendicular (perhaps c.1350-1400). It has crockets closely spaced at the angles. The most unusual feature is the transition from tower to spire which is effected by broaches starting below the parapet (cf. Scrooby, Notts.); Pevsner calls it 'remarkable'. The corner pinnacles rise from the slopes of the broaches, with short lengths of embattled parapet running across above the belfry lights. From the pinnacles curved flying buttresses join the spire. Above the joining point is a second set of slim pinnacles rising against the face of the spire. The tower also has diagonal buttresses with set-offs, and a tall three-light west window. The belfry lights are of two lights, with blind panels below a transom. The south side has a low Perpendicular aisle probably built in two sections (see the masonry join), the easternmost bay first as a chapel, then extended west. The broad south porch is outwardly Perpendicular, with embattled gable and diagonal buttresses. It has a stone vault on three thick transverse ribs, semicircular in section and chamfered, rising from ogee corbels. These seem c. 1250-1350, and may indicate that a Decorated porch existed. The chancel is hardly visible now behind a block-built hall with pyramidal roof, of 1978. The north side of the church has a regular aisle added in 1863, with porch in the westernmost bay, and a transeptal organ loft to the east. The tracery on this side is in the flowing variant of Decorated.

INTERIOR: the chancel arch has good capitals with foliage and little heads peering out between. Perpendicular mouldings with hollows between attached shafts. The south arcade is likewise Perpendicular the slim piers of lozenge plan with the narrow points facing north and south, and with attached shafts on those faces only (i.e. two per pier rather than the usual four). There is 'a prevalence of the concave everywhere' (Pevsner). Next to the altar is a round-arched piscina with chamfered edge. The south aisle was heavily restored in 1863, at which date the north aisle too was built. Its arcade is standard Victorian 'Middle Pointed', with clustered shafts in the piers and foliate capitals. The roofs are largely Victorian, with the possibility of older work in the south aisle. The chancel is of brick, with polychrome stone banding, now whitewashed. The south windows have black marble shafts to the reveals. Its roof is panelled, painted and gilded, with an attractive red patterned ceilure over the altar indicating the extension of 1889. Every second truss has hammerbeams.

PRINCIPAL FIXTURES: the high altar is probably early C20, of oak, Neo-Perpendicular. Oak pulpit, probably of 1863, with Gothic traceried panels. The mid-Victorian font is octagonal, with symbols of the evangelists in panels on the bowl. It has an oak font cover, of spire form. Chancel screen in the style of c. 1500, by C. Hodgson Fowler, 1899. Early C20 altar by F.E. Howard (north chapel) originally in the chancel, with linenfold panels. Reredos with painted Adoration of the Magi, by Sir Ninian Comper, from a church in Lincoln. In the tower is a large painted benefaction board, c. 1812-30. There is much Victorian stained glass, mainly c. 1860s to 1890s. Monuments are mainly simple Neoclassical tablets of the early C19. The nave is carpeted and furnished with upholstered chairs.

HISTORY: the pre-conquest settlement of West Retford, on the west bank of the River Idle, may have had a church. One existed by 1227 when there was a dedication on Michaelmas Day. The manor and the advowson of its church passed in the C13 to the Hercys, who retained it until 1570. There was much Perpendicular rebuilding including the west tower and south aisle. The interior was decayed by 1832, and a restoration and enlargement took place in 1863 under Charles Dales Butterfield (rector 1857-67). It seems he was not (as sometimes claimed) a brother of the architect William Butterfield. The chancel was lengthened in 1889, and a sacristy added at the north east, c. 1910. The adjoining church hall was dedicated on June 4, 1978.

REASONS FOR DESIGNATION:
The Church of St Michael the Archangel, Bridgegate, West Retford, is designated at Grade II* for the following principal reasons:
* A good medieval church with elegant slim spire, and a remarkable arrangement of broaches and flying buttresses at the angles
* The distinctive design of the Perp south aisle arcade, and of the stone-vaulted south porch
* Competent north aisle (1863) and polychrome brick chancel (1863 and 1889)
* Attractive fittings including a reredos by Comper, chancel screen of 1899, and good Victorian stained glass