A Grade I Listed Building in Alton, Staffordshire 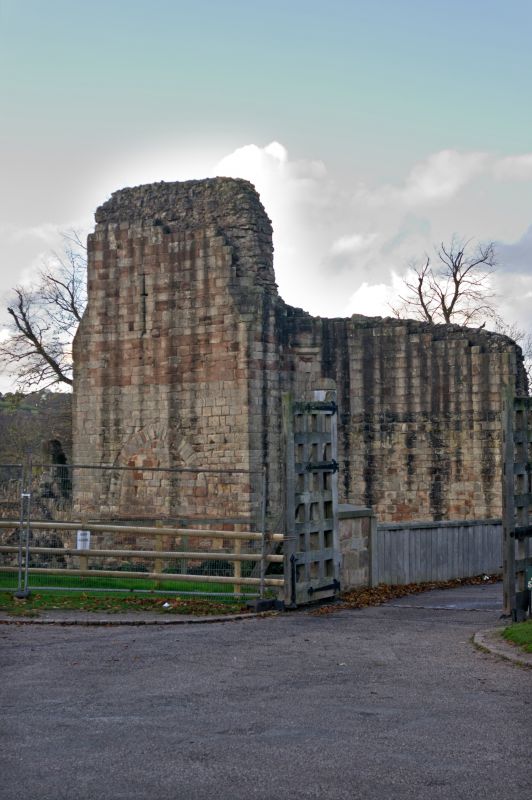 Castle remains. A castle was in existence here by 1176, some of
remains are late C12 and there are additions of the first quarter
of the C13. Ashlar with diagonal tooling and rubble core. The
castle is situated on a hill overlooking the Churnet Valley. It
was protected to the north by a precipitous cliff and to the south
by a rock-cut ditch and curtain wall which enclosed an irregularly
shaped site on an east-west axis; the gatehouse lay towards the
west end of the south curtain and there were two wall towers towards
the centre. The South Curtain: mainly late C12. The remains of
the wall stretch from the south-east angle of St. John's Prepatory
School (q.v.) to the western apex of the site being interrupted by
the eastern wall tower; towards the east end of the curtain is a
pilaster buttress, at the western apex immediately north of the
gatehouse is the base of a square buttress or turret. The parapet
has been destroyed but its height and position are to be discerned
on the west side of the eastern wall tower (see below). The Eastern
Wall Tower: late C12 and bonded into the curtain wall. Square
open backed tower with a battered base and a string course at the
ground level of the castle enclosure; a blind pointed arch springs
from the string course and indicates the position of a barrel vaulted
chamber entered from the enclosure; above this is a central arrow
loop of circa 1190 with cross slit and fishtail shaped base, to the
rear of the loop is a round arched embrasure; from the level of this
loop upwards the corners of the tower are chamfered. The left hand
side of the tower has a rectangular loop set high up immediately in
front of the former south curtain parapet, the position of which is
indicated by a break in the ashlar work. On the right hand side
of the tower corbelling spans the angle between tower and curtain
at parapet level. The Western Wall Tower: early C13. D-shaped.
Foundations only. The tower.was served by a newel staircase
situated in its north-west angle. The Gatehouse: early C13. Twin
D-shaped towers survive to a height of approximately 10 feet, the
eastern tower has a battered and offset plinth. Originally the
towers flanked a dentral gate passage with a portcullis at its outer
(southern) end, the lower part of a portcullis groove of square
section survives on the east side of the passage. A mural staircase
entered from a door on the west side of the passage gave access to
the upper parts of the gatehouse (now destroyed). Below the level
of the former gate passage and between the 2 towers is a sally-port
with round arch, it gives access to a central corridor beneath the
gate passage, at the north end of which a segmental-headed doorway
to the west leads to the basement of the west tower and to a doorway
in the north wall which probably communicated with the castle enclosure
via a mural staircase. There is no indication as to how the basement
of the east tower was entered, it may have been from a trap in the floor
of the room above. A short length of wall extends from the front of the
western tower and probably terminated the rock-cut ditch to the west and
flanked one side of the former approach road. The gatehouse was under-
going consolidation work at the time the survey (June 1985) and was partly
obscured by scaffolding. Derek Renn "Norman Castles in Britain" (1973)
p. 352. Scheduled as an Ancient Monument.