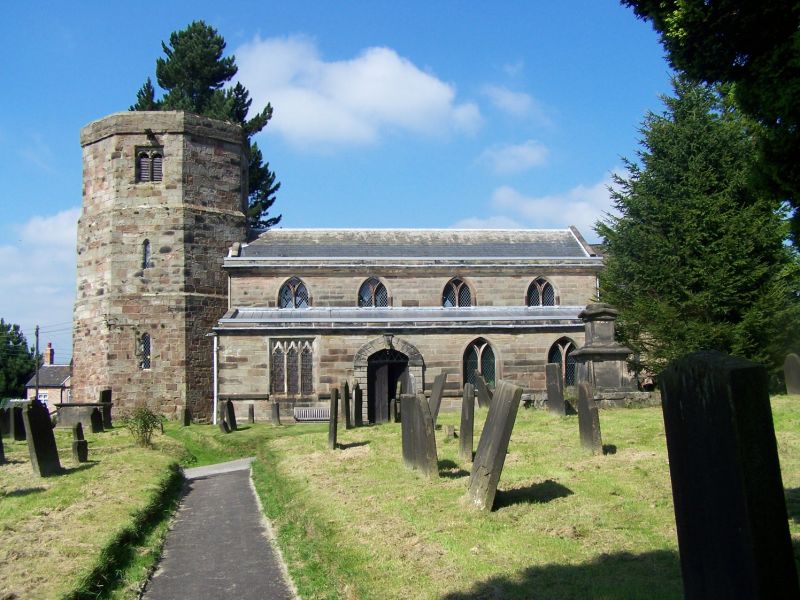 Parish church. Late C13 fabric,altered C15 and extended and restored
circa 1819. Coursed dressed and squared red sandstone; tiles, slated and
lead roof with verge parapets, the nave and aisles on cornice. West
tower, nave, aisles and chancel. Tower: the principal feature of the
church: stocky, octagonal and of 3 stepped-in stages with a parapet;
squat, Perpendicular, round arch bell chamber openings of 2 lights set in
square reveals on alternate faces. Small blind lancets to stages below.
Nave: part slate roofed; clerestory and cornice of 1819 and four bays of
pointed Y-tracery windows which appear sunken into aisle roofs. Aisles
of 1819; low pitched leaded roofs; 4 bays on a string at cill level;
pointed Y-tracery windows except to ends and west end of south aisle which
are all 3 light, in C15 style; entrances set to west of centre with even
quoin surround running round entire Tudor arched opening, deep reveal and
double doors with overlight. Chancel: C15 with steeply pitched roof;
two bays divided by two-stage buttresses, diagonal at angles; two light
ogee-headed windows set in rectangular reveal to sides; east window of
3 trefoil-headed lights set in Tudor arched reveal; classical plaque
set to north of window and a panel is situated below the east window
flanked by the carved stone figures. Interior inaccessible at time of
Resurvey. B.O.E., p. 116.